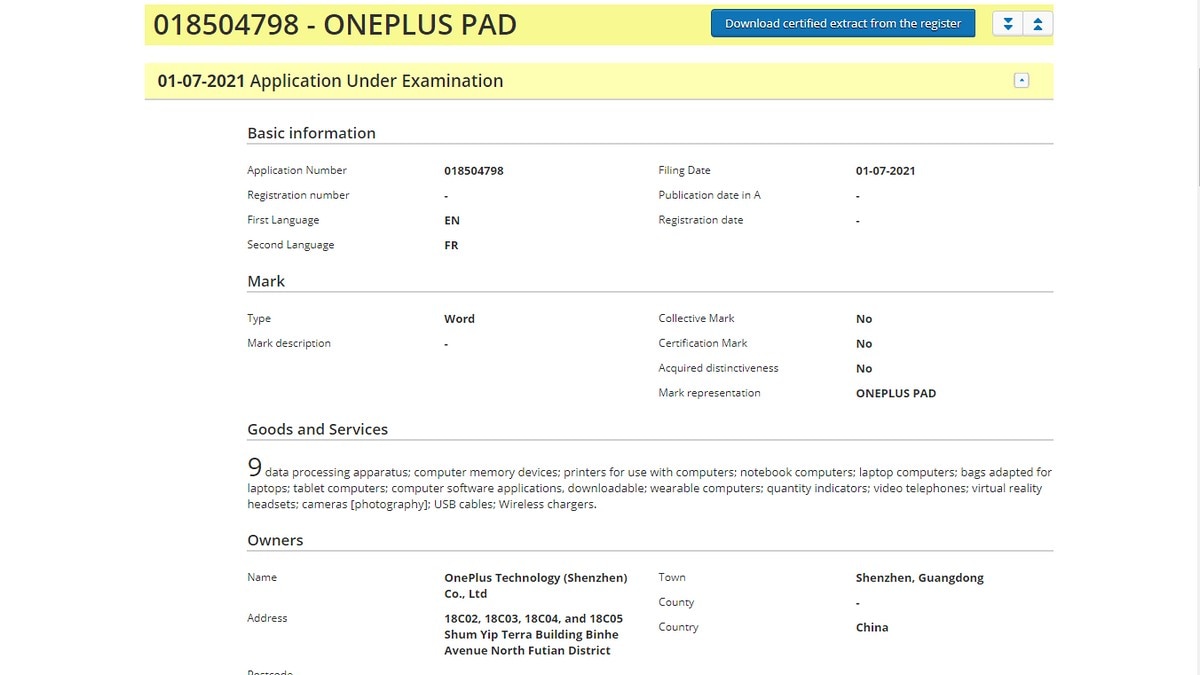 OnePlus Pad tablet may be in development, as hinted by a trademark filing with the European Union Intellectual Property Office (EUIPO). The Chinese company has set foot in multiple tech verticals covering smartphones, fitness bands, smartwatches, earphones, TVs, and more. Now, it looks like tablets will be the new product line from the company. At this point, there is no other information available about the OnePlus Pad and it is unclear whether the device will even debut this year.

The EUIPO trademark filing shows the name of the product as OnePlus Pad, suggesting the company is working on a tablet. It was filed on July 1 by OnePlus Technology Shenzhen with filing number 018504798. There is no other information on the tablet and it is unclear if OnePlus Pad will be the name for the device when it officially launches.

OnePlus Pad trademark was spotted by MySmartPrice and independently verified by Gadgets 360.

The company has released a variety of products in the last eight years of its existence. It started with smartphones and ventured into wireless earphones, wearables, power bank, wireless chargers, and TVs. It recently announced that it has merged with Oppo and that its OxygenOS is merging with Oppo’s ColorOS “to improve efficiency and standardise the software experience” across devices.

A recent leak about the OnePlus 9T states the company will be using ‘ColorOS 11 Global’ in the rumoured smartphone. The company had said that OxygenOS will remain the OS for global OnePlus users as always at the time of its merger announcement which raises concerns about the software for the rumoured OnePlus tablet.

As per the leak, the OnePlus 9T will sport a 108-megapixel sensor as the main camera headlining the quad-rear camera setup. The T-variants of OnePlus phones are typically announced about six months after the flagship models and the OnePlus 9 series was launched in India in March. To that end, the company could bring the OnePlus 9T to market in September.