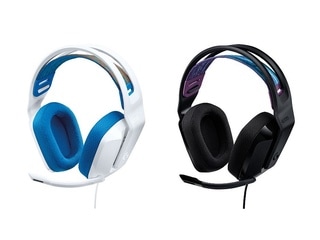 Amazon offers Logitech G335 wired gaming headphones with no-cost EMI plans that start at Rs. 306 per month. Additionally, users are given the opportunity to get Rs. 50 as cashback on every purchase of Rs. 500. Furthermore, users with Amazon Pay ICICI Bank credit card can get 5 percent cashback.

Design-wise, Logitech G335 wired gaming headphones are very similar to the wireless Logitech G733 Lightspeed. They feature an adjustable suspension headband design and soft-fabric earpads that Logitech claims make the headphones comfortable for long use. The wired headphones feature a 3.5mm audio jack for easy connectivity to any device — console, mobile, or PC. The headphone come with 40mm neodymium drivers for a crisp, clear sound.

The wired headphones from Logitech were launched late last month in the US. Notably, the Indian market doesn’t get the Mint colour option, the replaceable headbands, or microphone covers.

(Except for the headline, this story has not been edited by NDTV staff and is published from a press release)

Samsung Galaxy S23 Series Cases Launched in Multiple Colour Options: All Details
ChatGPT Usage Banned in French University Over Concerns About Fraud, Plagiarism
Sony, Xbox and Nintendo Will Not Be at E3 2023: Report
Google Pixel Tablet Image Leaks Online; Suggests Only One Model May Be Launched
WhatsApp Working on Ability to React to Messages in Community Announcement Groups on iOS: Report