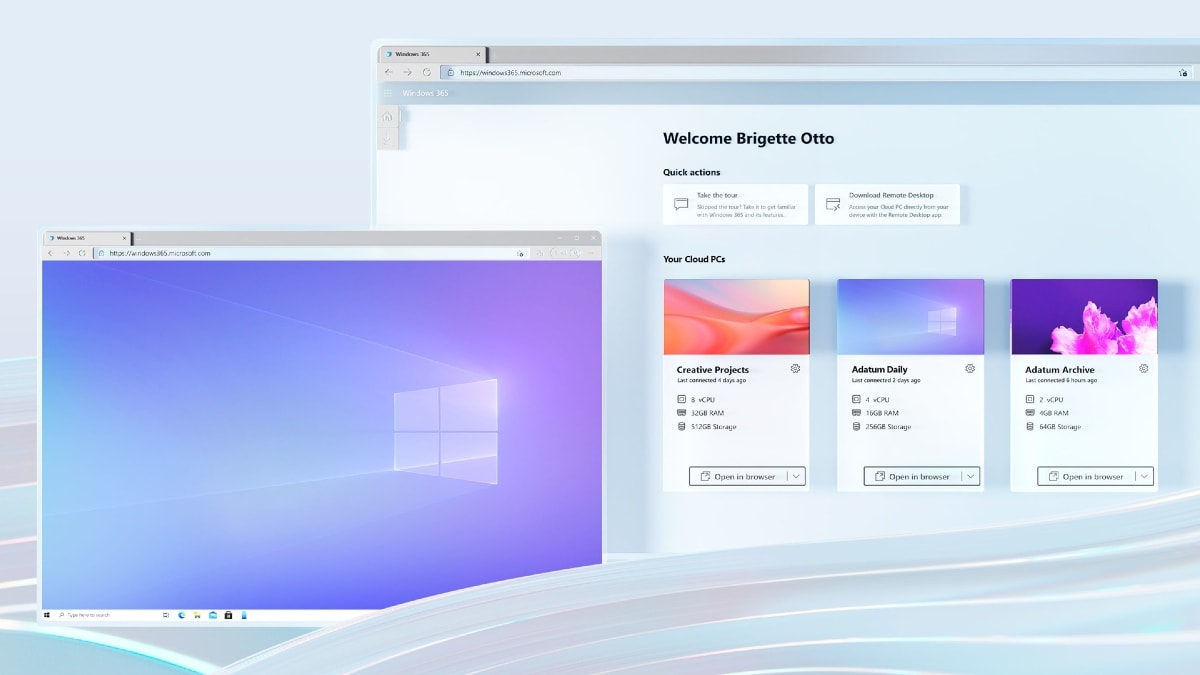 Microsoft has (accidentally) revealed one pricing option for its cloud service, suggesting how much businesses would need to pay to get the full-fledged virtual Windows experience. Windows 365 price details weren’t a part of its official announcement earlier this week, but a screenshot revealed the pricing of at least one configuration. Windows 365 is a device agnostic offering from the Redmond company that is designed to let users access Windows operating system through an app or even using a Web browser. It will be available in multiple SKUs to offer users with a list of configurations to choose from.

The Verge reports that Microsoft revealed the pricing of one of the Windows 365 subscription options during an Inspire session post the announcement. The company showed a screenshot that mentioned a monthly subscription of $31 (roughly Rs. 2,300) for the configuration that comprises two CPUs, 4GB of RAM, and 128GB storage. It will be a part of the Windows 365 Business option that is meant for businesses with fewer than 300 users.

A Microsoft spokesperson confirmed to The Verge that the inadvertently revealed pricing was for just one Windows 365 SKU. “Microsoft will have many more options, both in terms of configurations and price points, to share when the product becomes generally available on August 2nd,” the spokesperson said.

The revealed pricing option may not be the lowest as Microsoft will have a single CPU version as well, with 2GB of RAM and 64GB of storage. The India pricing of Windows 365 is yet to be revealed too, and it’s possible that the company might implement regional pricing that might be even lower, to account for differences in purchasing power.

Amazon and Citrix also have similar virtual workspace options. While Amazon sells a virtual Windows PC with two CPUs, 4GB of RAM, and 50GB storage at $35 (Rs. 2,600), Citrix sells its Workspace Premium at $18 (Rs. 1,300) per month, The latter has price variations depending on the number of users and tenure of contract. Unlike the competition, Microsoft wants to project its Windows 365 as a simpler and more easy-to-use solution by offering an all-inclusive per-user pricing.

In addition to the pricing, Microsoft has publicly detailed Windows 365 configurations that will be available starting August 2.

IT admins will be able to resize the configuration, depending on the Azure licence businesses will have. Users will also get self-service upgrade options directly from the Windows 365 portal.