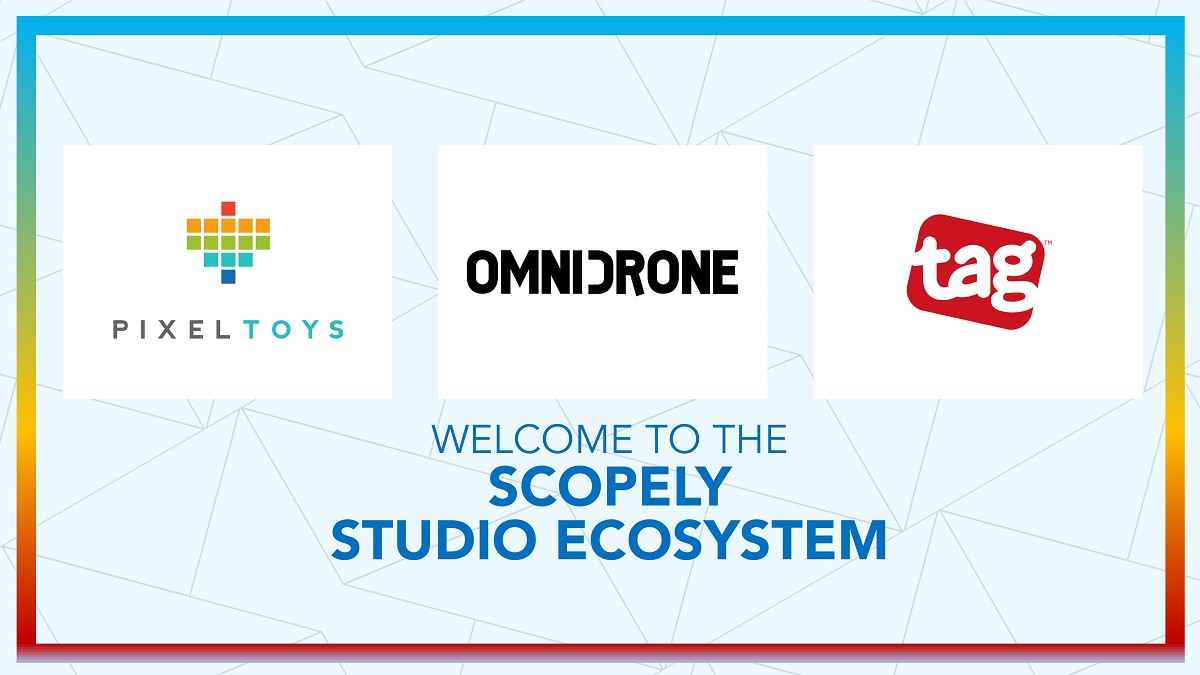 Scopely has invested $50 million in three European mobile game studios: Omnidrone, Pixel Toys, and Tag Games. These strategic investments support long-term commitments to co-create games, and it builds on Scopely’s strategy of partnering with talented mobile game makers and bringing their work to the widest audiences.

The Los Angeles-based Scopely is no stranger to big deals. In October, the company raised $340 million at a $3.3 billion valuation, and the company is often considered to be positioning itself for an initial public offering. It also acquired FoxNext Games in January 2020. Sometimes, its investments lead to acquisitions.

Scopely either creates games from the ground up in partnership with IP holders, or acquires titles to become Scopely games, where we employ our combined teams to grow and evolve the games – as in the case of FoxNext and Marvel Strike Force. And it has a large network of mobile game consumers as well as seasoned user acquisition teams that can help the games spread much faster than if the developers were on their own.

“Our studio ecosystem strategy was built to collaborate with and support the best game makers in the world, whether those teams are inside or outside of Scopely,” said Tim O’Brien, chief revenue officer at Scopely, in an email to GamesBeat. “We see great value in investing capital to eliminate barriers for our external partners – be it funding, talent, or technology.”

He added, “By eliminating the traditional boundaries between publisher and developer – and investing in our external partners – we are able to create as one cohesive team, which we believe is the most optimal environment for building games with long term value. It’s a win-win for us, our partner studios, and most importantly, our players.” 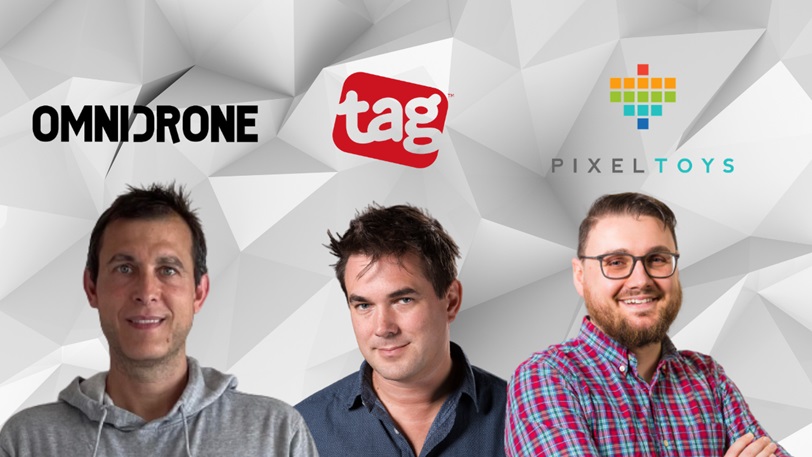 Omnidrone is based in Spain, Pixel Toys is in England, and Tag Games calls Scotland home. All three are working closely with Scopely on a number of in-development games across multiple genres.

The Barcelona-based Omnidrone is collaborating with Scopely on a yet-to-be-announced midcore game, with over 120 Omnidrone employees working alongside a rapidly growing Scopely team in Barcelona. Omnidrone CEO Gerard Fernandez leads the studio. Prior to Omnidrone, Fernandez cofounded Microjocs, one of the first companies to create and distribute mobile games in Spain. It was first acquired by Digital Chocolate and later purchased by Ubisoft. Omnidrone has 30 open positions.

Collaborating with Scopely on a different yet-to-be-announced midcore title, Pixel Toys is based in Leamington Spa, England, and it has developed multiple award-winning titles, including Gunfinger, Warhammer 40,000: Freeblade, Drop Dead, and Warhammer Age of Sigmar: Realm War.

Pixel Toys was cofounded by CEO Andy Wafer and chief operating officer Alex Zoro. Together, they have led the studio for nearly nine years, drawing upon their combined experience and decades-long careers spanning disciplines of game making, including design and engineering, marketing, and distribution. Before joining Pixel Toys, Wafer held senior leadership roles at Codemasters and FreeStyleGames, which Zoro cofounded and served as a senior leader after beginning his career with Rare.

Pixel Toys has 86 employees working on Scopely project and it is hiring for about seven open roles on the project.

The Dundee, Scotland-based studio Tag Games is co-creating a new title that will further expand Scopely’s massively multiplayer online strategy slate. The Tag Games team has worked with leading publishers on more than 60 games since its founding in 2006.

CEO Marc Williamson has been with Tag since 2010, first joining as head of production and studio manager. Before Tag, he grew his expertise as a gaming entrepreneur, establishing two of his own studios that delivered games for early touchscreen platforms and consoles like Sony’s PlayStation 2 and Nintendo’s Wii and DS systems.

Tag Games has 60 employees working on Scopely project. It is hiring for about 20 open roles on the project. 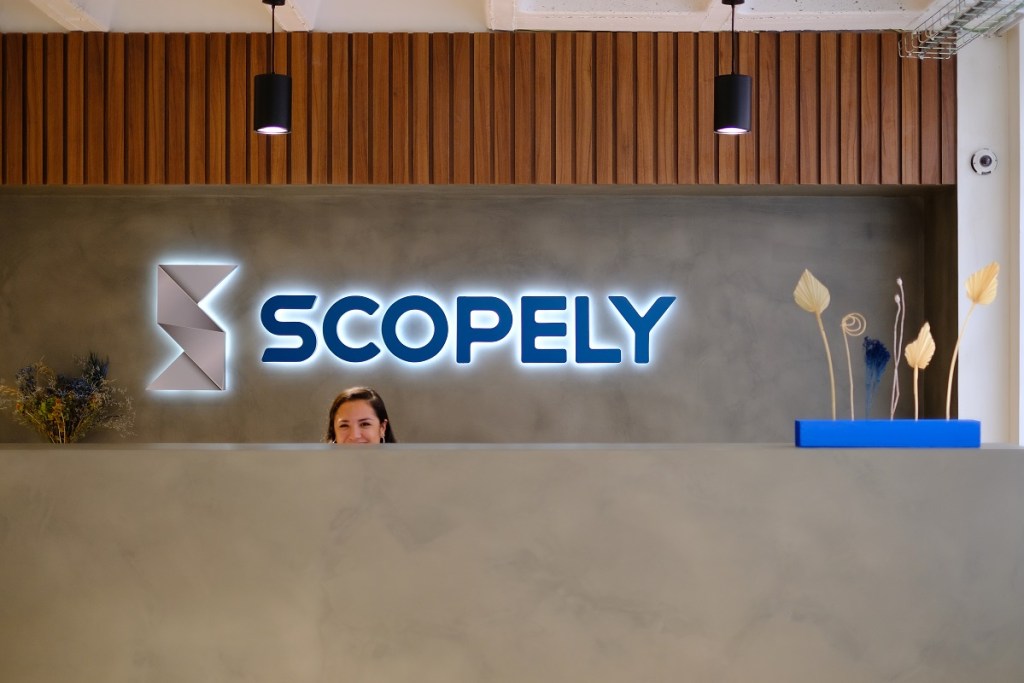 Above: The front desk at Scopely Barcelona.

Scopely is home to a studio ecosystem of game makers, co-creating game experiences around the world. Scopely game teams include product leaders as well as internal studios and/or external partner studios (such as Omnidrone, Pixel Toys, and Tag Games) that collaborate with a what it claims is a unique single team approach.

The company tries to eliminate traditional boundaries between developer and publisher, said Scopely co-CEO Javier Ferreira in a past interview with GamesBeat. The company refers to these operating styles as the Scopely Operating System.

As part of the Scopely ecosystem, both internal and partner studios can benefit from Scopely’s publishing infrastructure, operating system, and proprietary technology platform Playgami.

It offers a range of products, enabling teams to create games players love and grow them as great businesses. Scopely Studios include Boundless Entertainment (formerly FoxNext Games), Genjoy, PierPlay, and Digit, among others, and partner studios currently span four continents with Omnidrone, Pixel Toys, and Tag Games as some of the newest members of the ecosystem.

Beyond its external partner studios, Scopely has a rapidly growing footprint in Europe, with more than 500 Europe-based employees across Barcelona, Dublin, London, and Seville. The company also has a presence across Asia in Seoul, Shanghai, Singapore, and Tokyo, and in the U.S. in Los Angeles and Boulder.

Scopely’s Scrabble Go, launched in March 2020, has surpassed $500 million in lifetime revenue. The company was founded in 2011.

Samsung to Manufacture Flagship Galaxy S23 Smartphones in India for Local Market
Amazon Increases Minimum Purchase Amount on Amazon Fresh for Prime Members
The Last of Us TV Series Renewed for Second Season at HBO
With This Wallet You Can Do Everything
Apple Could Report Its First Decline in Quarterly Revenue in Nearly 4 Years, Say Analysts