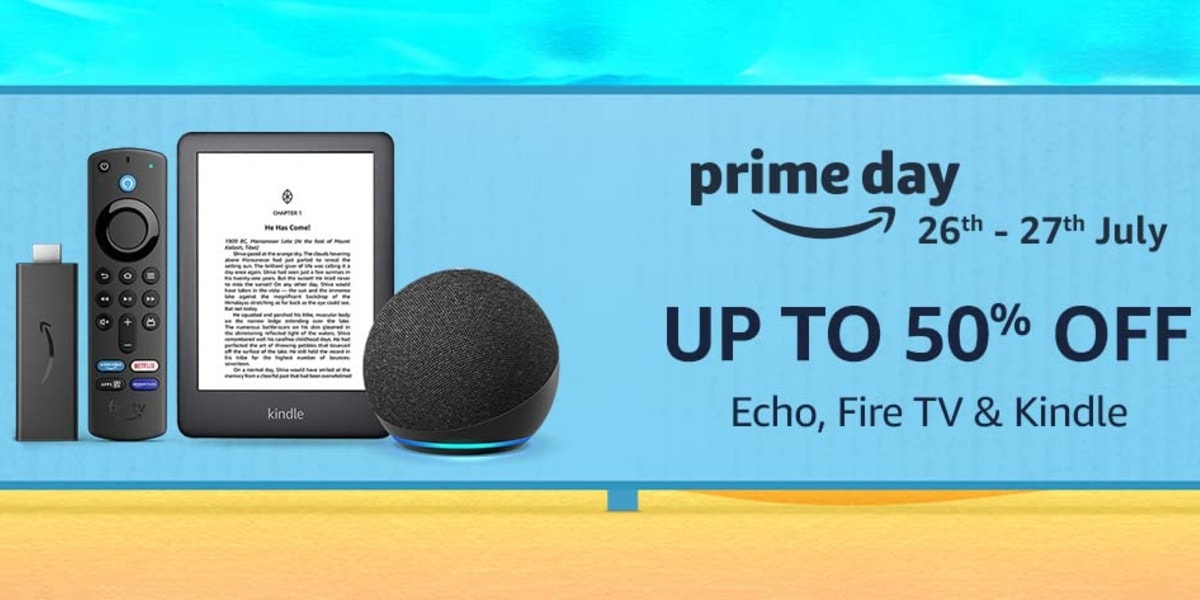 Amazon Prime Day sale deals will include discounts on Echo, Fire TV, Kindle, and Alexa-based smart home devices. The two-day annual sale will also bring deals on the newly launched Echo Show 10 and Fire TV Cube, the e-commerce company announced on Wednesday. Some of the Echo devices during the Prime Day sale are said to be available with up to 50 percent discount. Amazon will also bundle its Echo Dot smart speakers with select TV models.

One of the most convincing deals during the Amazon Prime Day sale will be the combo of the Echo Dot (3rd generation) along with a smart colour bulb at Rs. 2,299. The speaker normally retails at Rs. 3,499.

Customers purchasing a OnePlus TV U Series will also get the Echo Dot (3rd generation) at no additional cost. The smart TV range starts at Rs. 46,999 and comprises 50-, 55-, and 65-inch models.

The Prime Day sale will allow customers to get the Echo Dot (3rd generation) at a discounted price of Rs. 999 when purchased along with an AmazonBasics Fire TV Edition 4K smart LED TV that starts at Rs. 34,999. The 4K smart TV comes in 55- and 55-inch versions. Amazon will also offer the Echo Dot (3rd generation) at Rs. 1,499 on purchase of some other smart TV models during the Prime Day sale.

The Amazon Prime Day sale will offer up to 50 percent discount on Echo smart speakers and smart displays. There will also be up to 50 percent off on Fire TV devices, including the newly launched Fire TV Cube. Further, the sale will bring Fire TV Edition smart LED TVs at half their official prices.

For customers looking to pick a Fire TV Stick during the sale, there will be a 55 percent discount on the media streaming device bundled with annual subscriptions of Zee5, SonyLIV, and Voot Select under a limited period offer. Additionally, Amazon has announced a Rs. 4,000 discount on Kindle e-readers, including on the regular Kindle, the Kindle Paperwhite, and the Kindle Oasis.

You can explore the deals on various Amazon and Alexa-supported devices from the dedicated microsite.

The Prime Day sale will be held between July 26 and 27. It will be an exclusive event for Amazon Prime members. Apart from the Amazon and Alexa-specific discounts and deals, the sale will have a range of offers on smartphones. Flipkart is also hosting its Big Saving Days sale from July 25 to take on Amazon’s Prime Day sale.