Mobile advertising has come a long way. While the first SMS message was sent in 1992, it took eight years before anyone cottoned on to its advertising potential, with the initial SMS advert sent out in 2000. Since then, and particularly since the birth of the iPhone in 2007, mobile advertising’s acceleration and the proliferation of ad formats has been staggering. With SMS, Wireless Application Protocol (WAP) ads, and eye-catching in-app banners that watched as we blew stuff up with birds, ran through temples and surfed subways, mobile became the digital advertising medium.

With global mobile ad revenue reaching 276.21 billion U.S. dollars in 2020 (according to Statista), it’s the intimacy of smartphones and the multitude of available formats that has made them better advertising platforms than other media. Mobile ad formats are far from flawless, however. We know that almost 40% of global mobile inventory is not viewed by real people, while there is a persistent perception among parts of the industry that mobile advertising formats are harmful to user experience.

So to what extent are the current prevailing ad formats successful? And what does the future hold?

The most successful mobile ad formats of today

I had a front-row seat as AdColony launched its rewarded video format in Europe, the Middle East and Africa, creating a new ad ecosystem and business model for monetizing mobile games. Essentially, rewarded video creates a value exchange where players opt-in to view video ads in exchange for free lives, items, or virtual currency that are typically only available through in-app purchases (IAP) or gameplay progression.

Done right, rewarded video continues to be popular among developers and gamers alike. Some 79% of devs consider it their most effective ad format, while 72% of U.S. mobile gamers prefer opt-in rewarded video ads to interstitials (according to research from eMarketer). Players that watch rewarded video are reportedly six times more likely to complete IAPs. 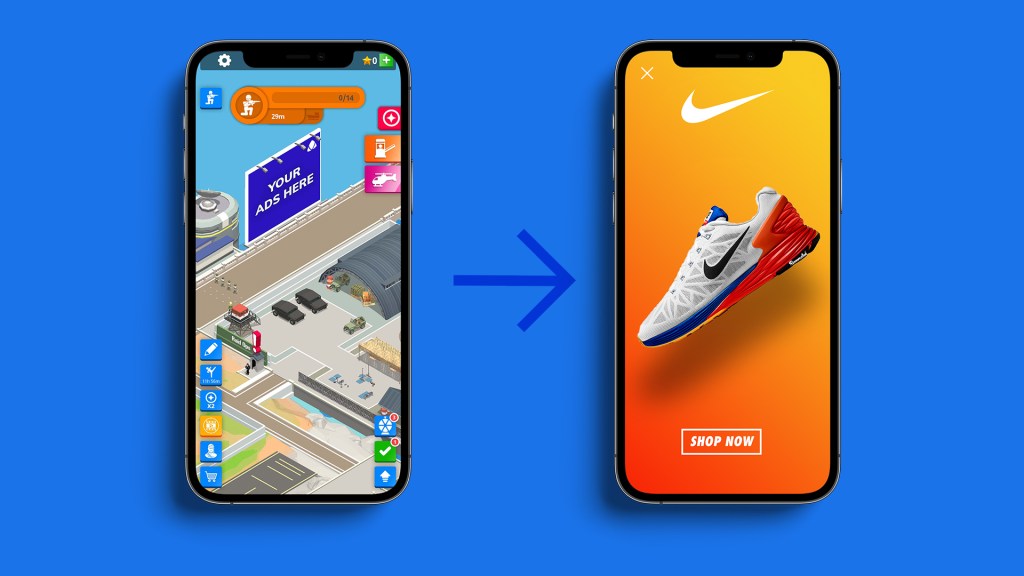 Early in-app ads received strong criticism for interrupting user experience, and interstitials offer a partial solution. Though they tend to take up most or all of the available screen space with text, video, or imagery, they are typically shown in natural transitions or gameplay pauses, such as the loading period between levels. Their large size enables brands to use engaging creative, which in turn leads to strong clickthrough and conversion rates. 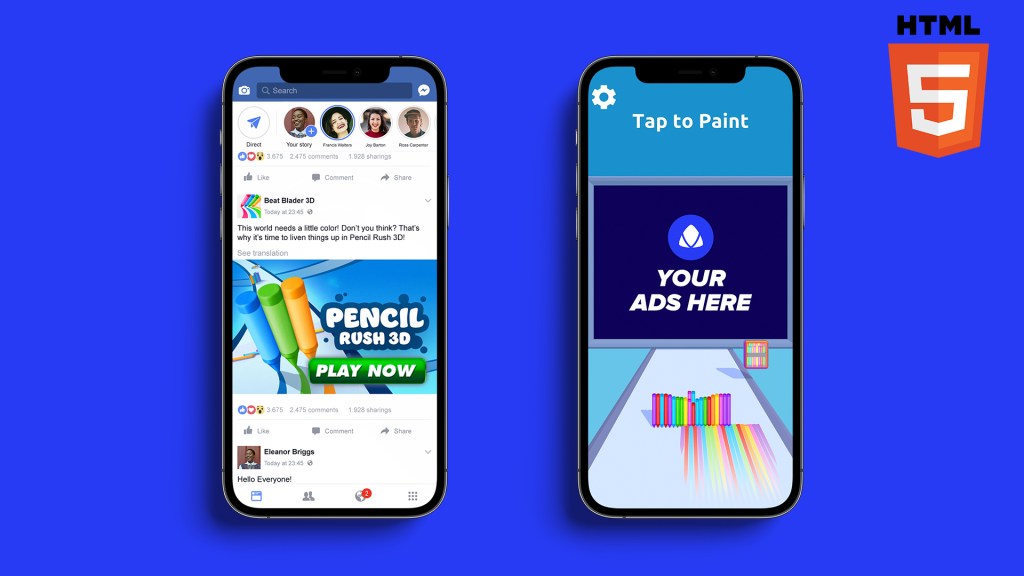 Popularized in the early days by the likes of CrossInstall and AppOnboard, where I was an early employee, playable ads are most commonly used in mobile games as a “try before you buy” mechanic. They provide snippets of gameplay that tempt users to install the full game. With playable ads, developers can wow potential players with a dopamine hit of gameplay experiences, introduce them to the key mechanics of a game, and thus acquire users who are likely to have higher than average lifetime value (LTV), and are less likely to quickly uninstall the game. Careful not to oversell though — it’s common for playable ads to be made to a higher standard than the games they are supposed to represent! Outside of games, campaigns such as the Burger King app’s “The Angriest Whopper” used a playable ad in the German market which challenged users to collect 20 jalapenos in under 20 seconds to unlock discount coupons. The campaign achieved an average clickthrough rate (CTR) of 35%-40%. 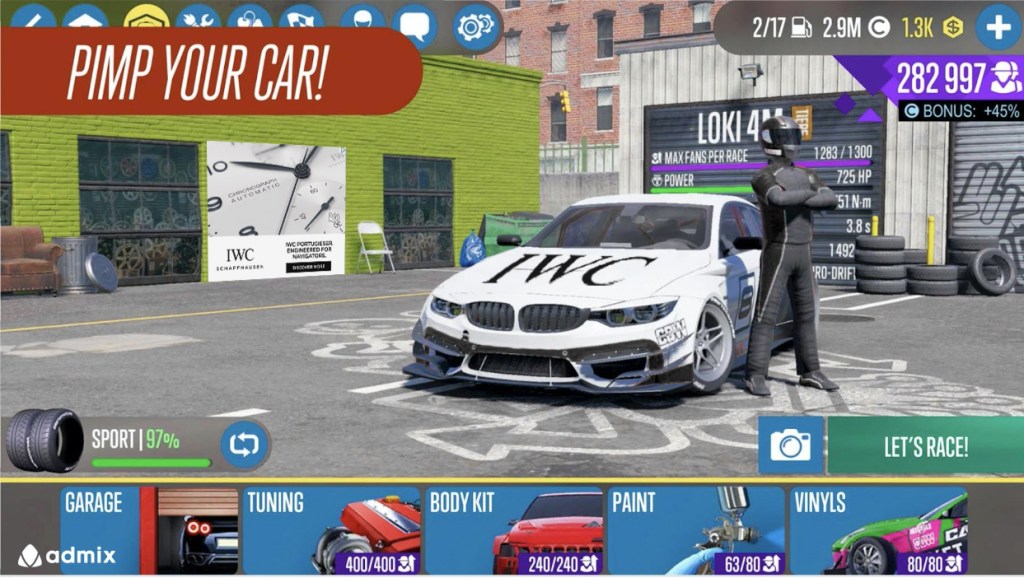 You might have heard about “native” ads, such as promoted posts in the Twitter app that match the form and function of the other, organic tweets in your timeline. The in-play mobile concept builds on this idea by injecting ad creative into the fabric of mobile games. Recently verified for their high viewability, these virtual billboard and video ads appear during gameplay on advertising hoardings in a sports stadium or race track. U.K.-based breast cancer awareness charity CoppaFeel! recently ran a campaign with Admix targeting women aged 18-24, injecting CoppaFeel!’s ad creative into mobile gaming content across multiple genres.

By appearing in natural game contexts, in-play doesn’t pause or alter gameplay experiences, making it more player and brand-friendly than other formats. Indie studio Hypemasters reported a 22% increase in ad revenue by integrating in-play, while Neon Play’s Idle Army Base: Tycoon Game ran a trial that showed in-play ads had no impact on player retention or session times over the course of a month, regardless of how many ads were shown.

An interesting addition to the mobile ad scene, audio ads have spread from Spotify to YouTube and now into a wide range of apps and games. Formats include audio-only, audio-accompanied by mini-banners, or even rewarded audio ads. A recent in-game AudioMob campaign with Warner Music claimed a CTR 1,000-times higher than traditional banner ads. Warner Music used audio banner ads for a campaign with artist Joel Corry.

Alongside greater use of in-gameplay video and banner ads, we will see performance advertising options and in-play cosmetics — effectively digital product placement — as well as AR and VR options.

Apple’s new iOS 14.5 update drastically limits the amount of data available to advertisers without explicit opt-in from consumers. Because in-play doesn’t rely on third-party data to target or measure, it’s well-placed for explosive growth in this new normal. 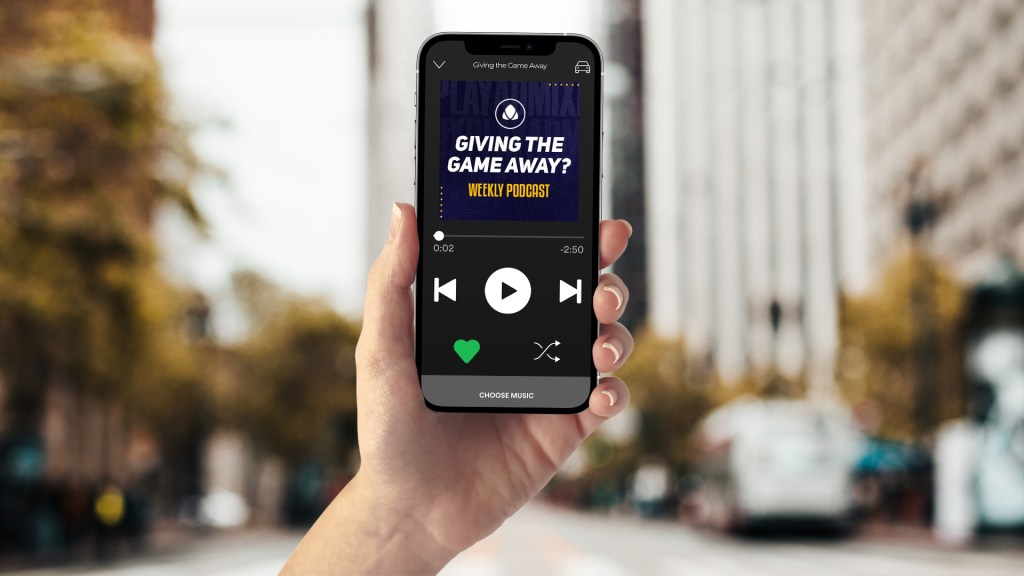 While mobile games are mostly hands-on, there’s plenty of hands-free mobile content such as podcasts and audiobooks. Want to find out more about a product or complete a quick buy from a trusted service such as Amazon? Just tap your screen, shake your phone, or say the magic words. 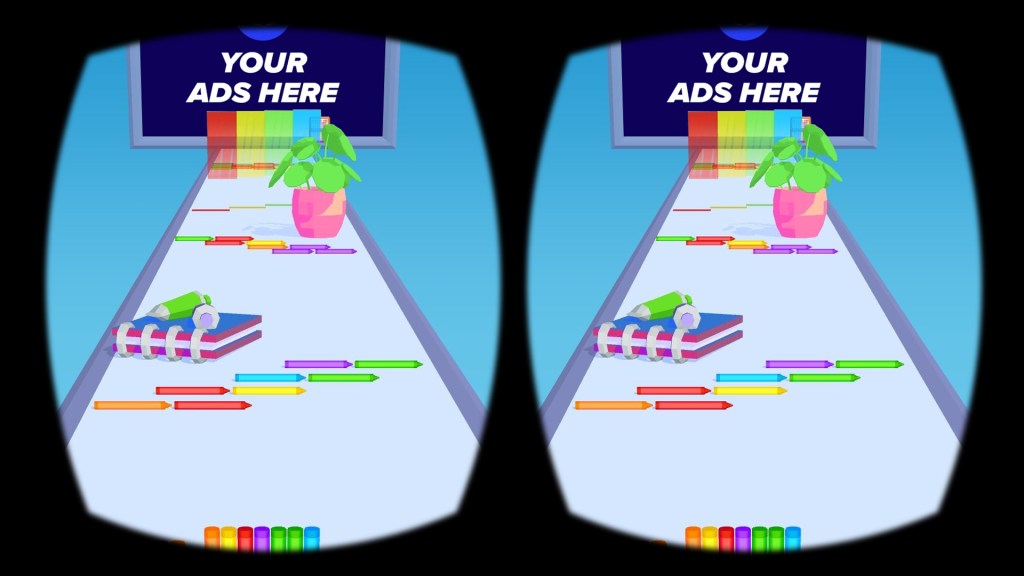 While smartphone VR headsets like the Samsung Gear and Google Cardboard are fading into obscurity, standalone headsets such as the Oculus Quest are clawing their way into the mainstream. With sales of head mounted displays predicted to have been as high as 68 million in 2020, VR is a growing advertising segment. Likewise, the burgeoning use of AR to find out how an Ikea sofa looks in your living room, bring your digital sketches to life with SketchAR or provide information on the landmark you’re standing in front of with Google Lens, will present massive advertising opportunities. 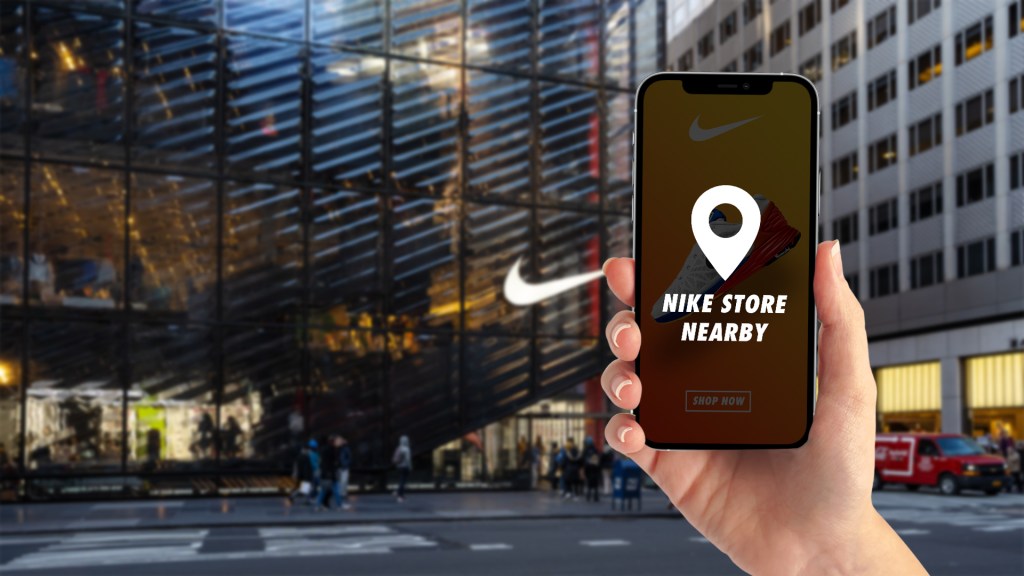 One such opportunity is serving hyperlocal ads using GPS. People will increasingly be able to opt-in to share their geolocation data to receive ads for nearby services or products, or coupons and promotions for local businesses. 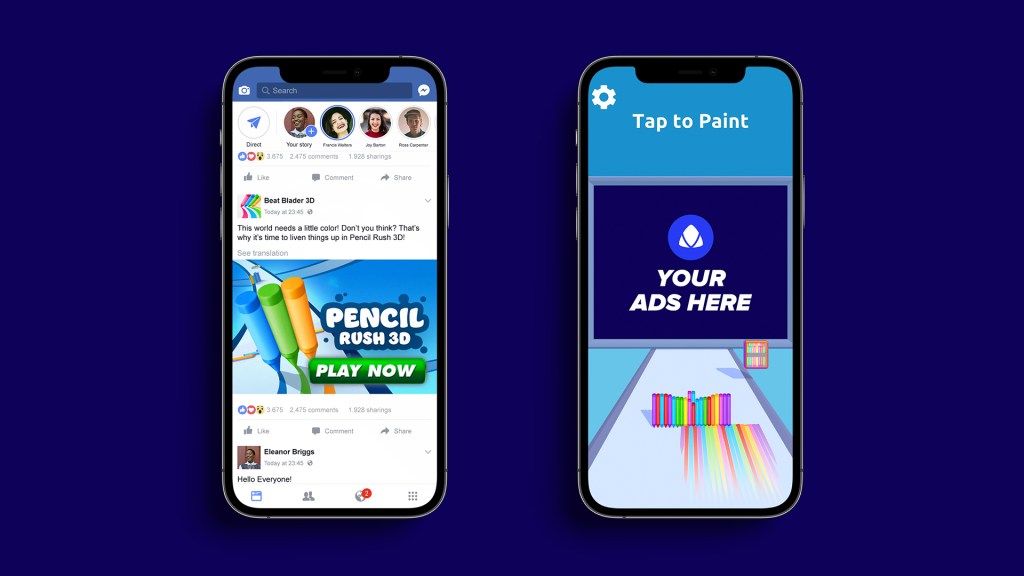 Like In-Play, HTML5 minigames and ads will likely play a greater role in the mobile advertising mix as they can thrive off contextual data. Even if the app or game being advertised doesn’t use HTML5, it can still use it to showcase itself. 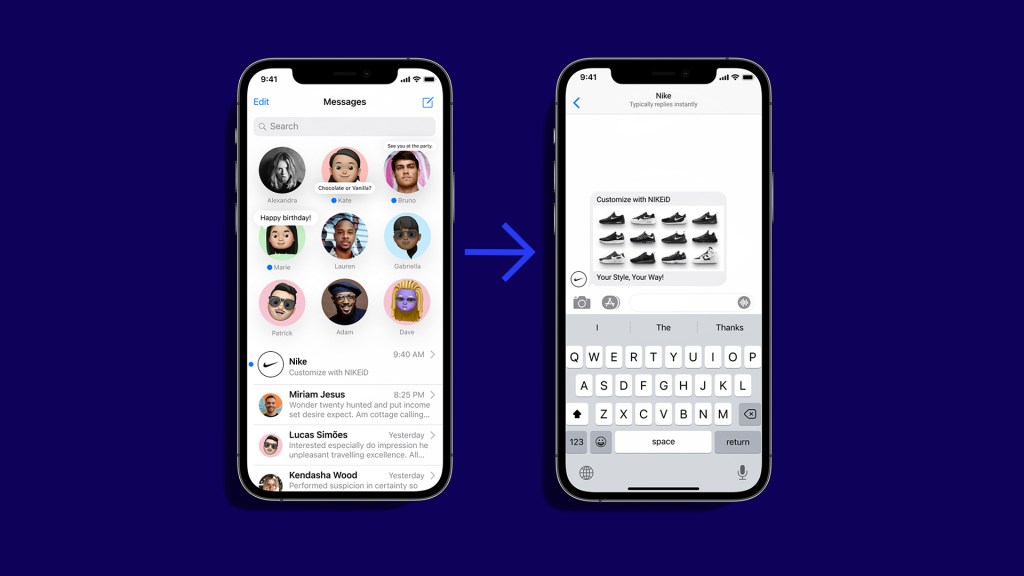 We’re all familiar with chatbots as a customer service tool, even if we don’t always appreciate them. As generational attitudes shift away from wanting to talk to a real person to being more comfortable avoiding in-person conversations, we’ll see more chatbot ads. We see these most prominently within Facebook Messenger, but they’ll become more popular in standalone ads to increase brand engagement and even complete purchases.

It’s not an ad format per se, but I’d be remiss not to touch on the increasingly intelligent tech that will power the mobile ad world. In the cookieless universe, we will increasingly rely on contextual data where users have not opted to share their data. From fully programmatic purchasing of inventory to algorithms that decide how and when to serve which ads to whom, and learn from the data they gather, the process of buying, serving and reporting on mobile ad campaigns is becoming increasingly sophisticated.

You’ll probably have noticed that a number of ad formats feature in how I perceive both the present and the future of advertising. That’s because we are always iterating on ad formats, such as playables and audio ads. Of course, there are formats such as rewarded video and, I hope, in-play, to become seminal and create entirely new business models.

Looking at user behavior and the evolution of mobile advertising over the past few years, I see two crossing trends. On one axis we have interruptive advertising — it’s mature and still lucrative, but it’s at a saturation point and set for a measured decline. With the other, nonintrusive ads are poised for rapid growth as gaming becomes more immersive and privacy becomes front of mind for developers, publishers, and users.

iPhone 14, iPhone 14 Plus Get Discounts of Up to Rs. 15,000: Here’s How Much They Cost Now
iPhone 15 Series Could Feature Wi-Fi 6E Like the Latest MacBook Pro, iPad Pro: Report
Marvel Snap Is Rolling Out New PvP ‘Battle Mode’ That Lets Players Take on Their Friends
Garmin Vivomove Trend Hybrid Smartwatch With Up to 5 Days of Battery Life Launched: Price, Features
Clap to join the Dark Side