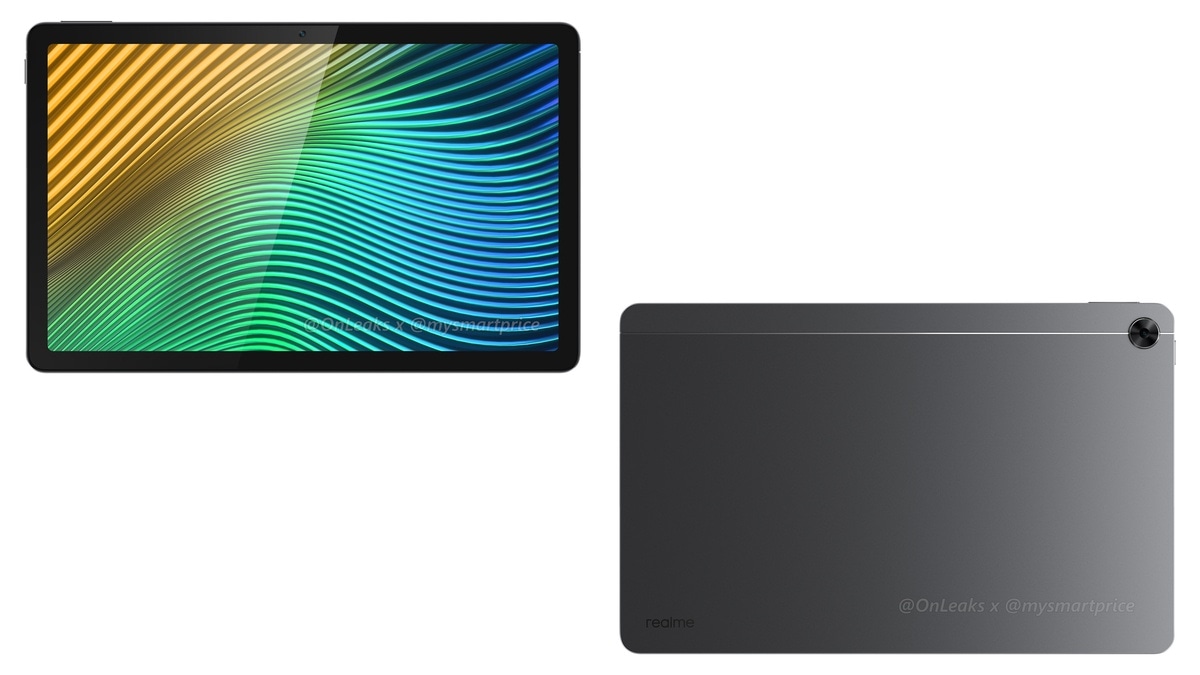 Realme Pad specifications and design have been tipped in much greater detail in a new leak. The launch date for the upcoming tablet remains a mystery but it is expected to be released in the market around the third quarter of 2021. Renders shared by a tipster suggests that the Realme Pad will come in two colour options and will sport an aluminium unibody construction. Recently, the forthcoming Realme tablet — could also be called Realme Tab — has also been spotted on the IMDA certification site with its camera specifications.

The renders of the Realme Pad have been shared by tipster Steve Hemmerstoffer (@onleaks) in collaboration with MySmartPrice. These suggest that the upcoming Realme tablet will be offered in Gold and Grey colour options with an aluminium unibody construction. The tablet is seen sporting a two-tone finish at the back, accentuated by a straight line that runs right through its single camera module. The front of the tablet has moderately thick bezels with the selfie camera at the top edge (when held horizontally). The report says that the upcoming tablet could sport a 10.4-inch display.

The Realme Pad renders show it featuring a power button and two speakers on one side and two more speakers, a USB Type-C port, as well as housing for a stylus on the other side when held vertically. There’s also a volume rocker and a SIM tray.

Recently, the Realme Pad was spotted in an IMDA listing, which suggested that the soon-to-be-launched tablet will come with the model number RMP2102. A previous leak also suggested the camera specifications of the Realme Pad. It is expected to sport an 8-megapixel sensor each for both front and rear camera modules. Both will get a 1.36-inch sensor with an f/2.8 aperture, 2.8mm focal length, image stabilisation, and a 65.3 degrees field of view (FoV). Both cameras are expected to capture images in 3,264×2,448 pixels resolution.

CBSE Class 10 Results to Be Announced at 12pm Today: How to Check

iPhone 14, iPhone 14 Plus Get Discounts of Up to Rs. 15,000: Here’s How Much They Cost Now
The Last of Us Episode 4 Trailer: A Road Trip Poses Big Trouble for Joel and Ellie
Here’s how Apple’s VR/AR headset is going to work
WhatsApp Working on Ability to React to Messages in Community Announcement Groups on iOS: Report
Redmi Smart Band 2 With 1.47-Inch TFT Display Launched: Price, Specifications