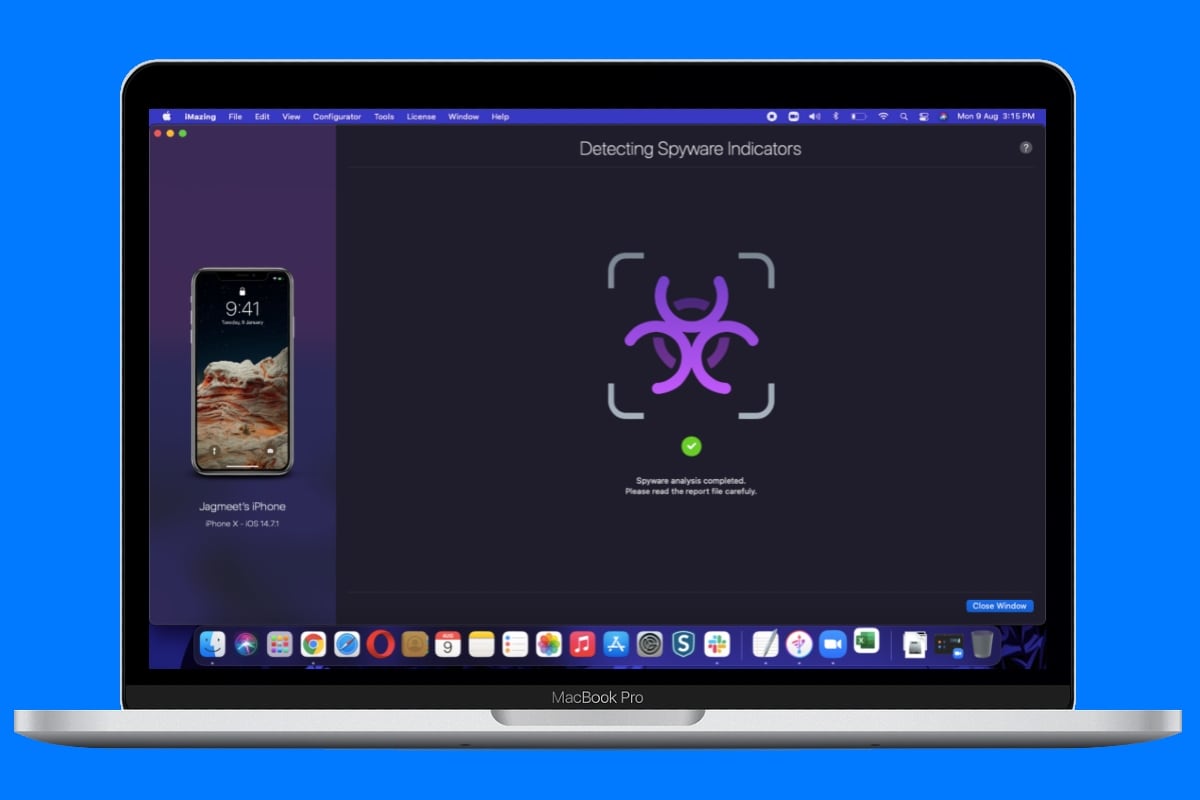 Pegasus spyware can now be detected on an iPhone using a free tool without requiring coding skills. Geneva, Switzerland-based DigiDNA has updated its iOS device manager iMazing with a spyware detection feature that can be used to detect Pegasus. The company has designed the feature using Amnesty’s Mobile Verification Toolkit (MVT) as a reference. The tool can be installed on a Mac or a Windows PC to let you discover whether your iPhone was exploited using Pegasus. The spyware was allegedly used by governments in various parts of the world including India to snoop on activists and journalists.

The spyware detection feature is available as a part of iMazing 2.14. It uses the same list of indicators of compromise (IOCs) that Amnesty International’s Security Lab compiled to help people detect Pegasus infection on their devices. Some privacy experts praised the new tool for how user friendly it is, compared to the earlier methods.

Although chances are quite low that you would be affected by the spyware if you aren’t famous anyone can still use iMazing on your computer to detect whether Pegasus has infected their iPhone. You can download the tool for free on your Mac or Windows PC from the iMazing website.

DigiDNA CEO Gregorio Zanon said in a blog post that the spyware detection feature is built on MVT’s methodology that Amnesty International released as an open-source development last month — shortly after the news revealing the military-grade spyware attack shocked the masses. However, unlike the original toolkit that requires command line knowledge and some coding skills, you can use iMazing even if you don’t have those technical expertises.

It is important to note that iMazing’s offering is specifically designed for devices based on iOS and is not available for Android phones. It also doesn’t have support for analysing file system dumps from jailbroken devices.

How to detect Pegasus spyware on an iPhone using iMazing

To begin with the steps on how you can detect the existence of Pegasus spyware on your iPhone, you firstly need to have the latest version of iMazing installed on your Mac or Windows machine. The spyware detection feature is available even for the people using iMazing under its free trial. However, the software is available as a freemium and requires a licensing fee to unlock all its features.

We noticed that it takes about half an hour’s time for iMazing to have the backup ready, though the analysis part doesn’t take more than five to 10 minutes. In our testing, we found two warnings but those were just due to some parse errors.

DigiDNA recommends users to reach out to its customer support team to let it do further analysis. This will help avoid false positive cases. The company also suggests that if you have got a positive report and you or your family members are active in a “politically sensitive context”, you should immediately remove your SIM card and turn your iPhone off.

With This Wallet You Can Do Everything
Windows 10 is going away…
Google Pixel Tablet Image Leaks Online; Suggests Only One Model May Be Launched
Garmin Vivomove Trend Hybrid Smartwatch With Up to 5 Days of Battery Life Launched: Price, Features
Apple Led Smartphone Market in Holiday Quarter Amid Largest-Ever Decline in Smartphone Demand: IDC