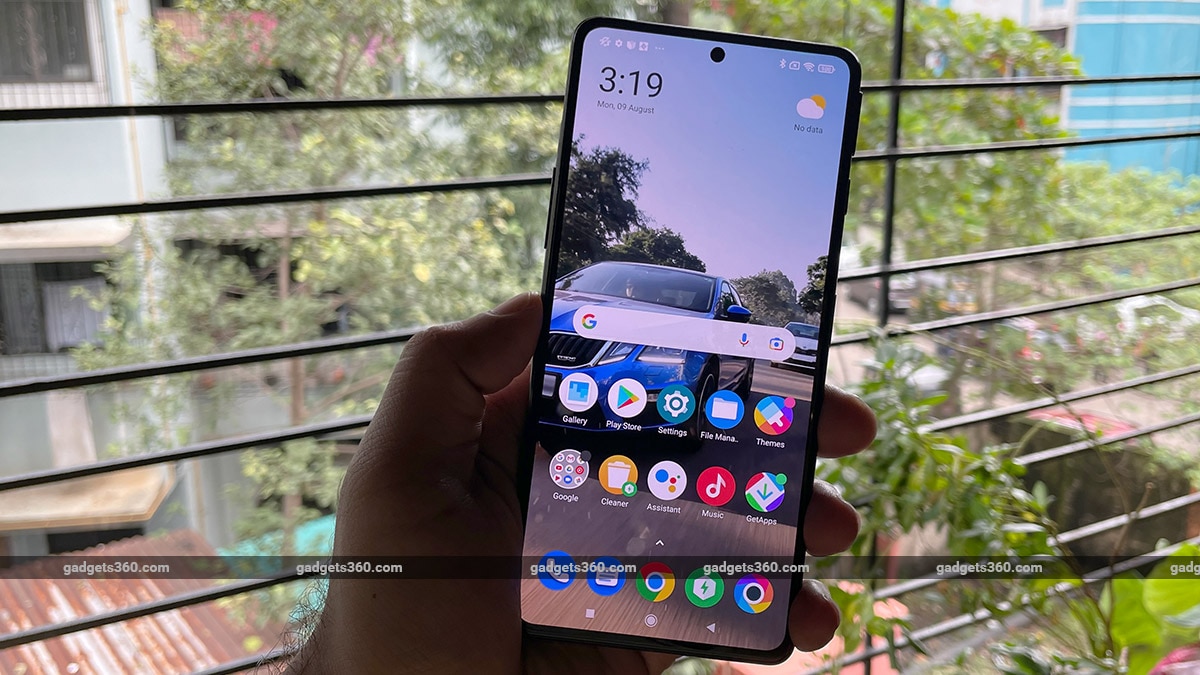 Poco F1 was the first smartphone to bear the Poco brand in India. It offered excellent value for money and was an easy pick for those purely looking for performance, particularly for gaming. While Poco has become an independent company and launched multiple series of smartphones since then, the Poco F1 has not had a true successor, until now. The company has launched the Poco F3 GT in India as the next model in the F series, and this smartphone too focuses on performance. So is the Poco F3 GT the new go-to smartphone for gaming on a budget? Or should you look for alternates? I put the Poco F3 GT to the test to find out.

The Poco F3 GT is big, and it sports a big 6.67-inch display with thin bezels on the sides. It has a metal frame that gives it a premium look and feel. The four corners are flattened, and the top and bottom sections of the frame are designed to make it comfortable to hold the F3 GT in landscape mode. On the right, the frame has two sliders that can be pushed inwards to engage two “maglev” trigger buttons. These can be used for gaming and they offer good clicky feedback. Poco has also positioned the power button on the right. It is easy to reach and houses the fingerprint scanner which makes it easy to unlock the smartphone. On the left side are volume buttons and the third microphone.

The top of the phone has a grille for the second speaker, plus a secondary microphone and an IR emitter, which is a common sight on Xiaomi smartphones. At the bottom of the frame is the USB Type-C port, bottom-firing speaker, primary microphone, and SIM tray with two Nano-SIM slots.

You get Corning Gorilla Glass 5 protection at the front and the back, which should withstand daily use. The Poco F3 GT has a triple camera setup at the back with a lightning bolt-shaped LED flash right next to it. This camera module also has RGB lighting and protrudes slightly. There’s a metal trim around it which should help prevent the lenses from getting scratched. Poco does provide a case in the box.

The Poco F3 GT weighs 205g which is slightly on the heavier side. It is also IP53 rated which means it is splash resistant.

The Poco F3 GT boasts of powerful hardware. It is powered by the MediaTek Dimensity 1200 SoC and is offered in 6GB and 8GB RAM options, both with 128GB of storage, and there’s also an 8GB RAM, 256GB storage option. I had the mid-spec variant with 8GB of RAM and 128GB of storage for this review. The big 6.67-inch AMOLED display sports a full-HD+ resolution and a 120Hz refresh rate. There is support for HDR10+ and the panel has a 240Hz touch sampling rate which gets bumped up to 480Hz when game mode is enabled.

There is support for 5G as well as 4G VoLTE, Bluetooth 5.1, and dual-band Wi-Fi. It also works with five satellite navigation systems. The Poco F3 GT packs in a huge 5,065mAh battery and comes with a 67W fast charger in the box. The charger is bigger than usual and has a bright yellow cable with an L-shaped Type-C connector. This makes it easy to play games or watch content while the phone is charging.

In terms of software, the Poco F3 GT runs MUI 12.5 on top of Android 11. My unit had the June Android security patch but got an update to the July patch during the review period. The Poco F3 GT comes with a fair number of preinstalled apps such as Amazon, Facebook, GetApps, LinkedIn, Netflix, Prime Video, and some Google apps. I found GetApps and Themes to be a bit spammy, pushing notifications regularly. Apart from this annoyance I had no issues with the UI and found it easy to use.

The Dimensity 1200 SoC can handle anything you throw at it. I could multitask and load heavy apps on this smartphone without any issues. The 8GB RAM unit I had showed absolutely no slowdowns during the review period. The higher 120Hz refresh rate makes scrolling through menus and lists within apps very smooth. There is DC dimming as well, but it only works when the display refresh rate is set to 60Hz.

Poco’s side-mounted fingerprint scanner was quick, and needed only a single tap to unlock the device. Face recognition on the Poco F3 GT was quick as well. The big AMOLED display had good viewing angles and was bright enough to be visible outdoors. The stereo speakers on the device enhanced the video-watching experience. Poco’s RGB lighting around the camera module kicks in while the phone is charging and when game mode is enabled. It also pulses to show pending notifications and incoming calls.

I put this phone through benchmarks and it did well. In AnTuTu, the F3 GT scored 6,11,051 points. In Geekbench 5’s single-core and multi-core tests, it scored 855 and 2,709 points respectively. The Poco F3 GT also managed 38fps and 117fps in GFXBench’s Car Chase and T-Rex benchmarks respectively. These scores are higher than those of the similarly priced OnePlus Nord 2 (Review), which I tested recently.

The 67W bundled charger has an L-shaped connector

Coming to gaming, I played Battlegrounds Mobile India (BGMI) on the Poco F3 GT and it defaulted to the HD graphics preset and high frame rate. The game was playable at these settings without any lag or stutter. The Poco F3 GT’s physical trigger buttons made gaming more engaging, and so did the stereo speakers. I played the game for 20 minutes and noticed a 3 percent battery drop. The device also got slightly warm to the touch.

Battery life on the Poco F3 GT was quite good and the phone lasted me about a day and a half without needing to be plugged in. In our HD video loop test, the Poco F3 GT managed to run for 17 hours and 36 minutes. When it did run out of juice, the supplied 67W fast charger was capable of charging it up to 72 percent in 30 minutes, and it took about 47 minutes to charge fully.

The Poco F3 GT packs a triple camera setup at the back consisting of a 64-megapixel primary camera, an 8-megapixel ultra-wide angle camera, and a 2-megapixel macro camera. For selfies it has a 16-megapixel shooter. The camera app is pretty straightforward and easy to use. It has a quick toggle for AI scene detection and HDR. Switching between different shooting modes is very easy and it also lets you activate filters before taking a shot.

Daylight shots had decent details but the F3 GT tends to sharpen them which makes them look artificial. The dynamic range was acceptable but not great. With the ultra-wide angle camera you can capture a much wider field of view but the image quality isn’t as good as with the primary camera. The output isn’t as crisp as with the primary camera, and it’s best used only when needed.

Close-up shots taken with the Poco F3 GT had good detail, and the phone applied a soft depth effect. Similarly for portraits, edge detection was quite good and the phone could separate the subject from the background correctly. It also let me set the level of background blur before taking the shot. The macro camera on the Poco F3 GT lets you get close to a subject but there is the possibility of blocking light with the smartphone if you get too close. Macro shots had good detail and even tiny text on a coin was visible, but the output is capped at 2 megapixels.

Low-light camera performance was strictly average. The AI was quick to detect low light and set the camera up accordingly. It boosted brightness in the image artificially causing reflections to look weird. Photos shot with Night mode looked more natural.

Selfies taken with the Poco F3 GT were crisp, although slightly sharpened. Selfie portraits had good edge detection and the smartphone could detect faces even with masks on.

The Poco F3 GT is a fresh addition to the Poco F series after a long time. You get very good performance for the price, and the big battery coupled with fast charging sweetens the deal further. The Poco F1 (Review) did not have the best cameras and the new Poco F3 GT doesn’t either – in terms of photo quality, it came second in most scenarios when I compared it to the OnePlus Nord 2.

If you are looking to play games on your smartphone, the Poco F3 GT is a good companion. It has physical trigger buttons, stereo speakers, and an AMOLED display with 120Hz refresh rate. On the other hand if you want an all-rounder in this price segment, take a look at the OnePlus Nord 2.