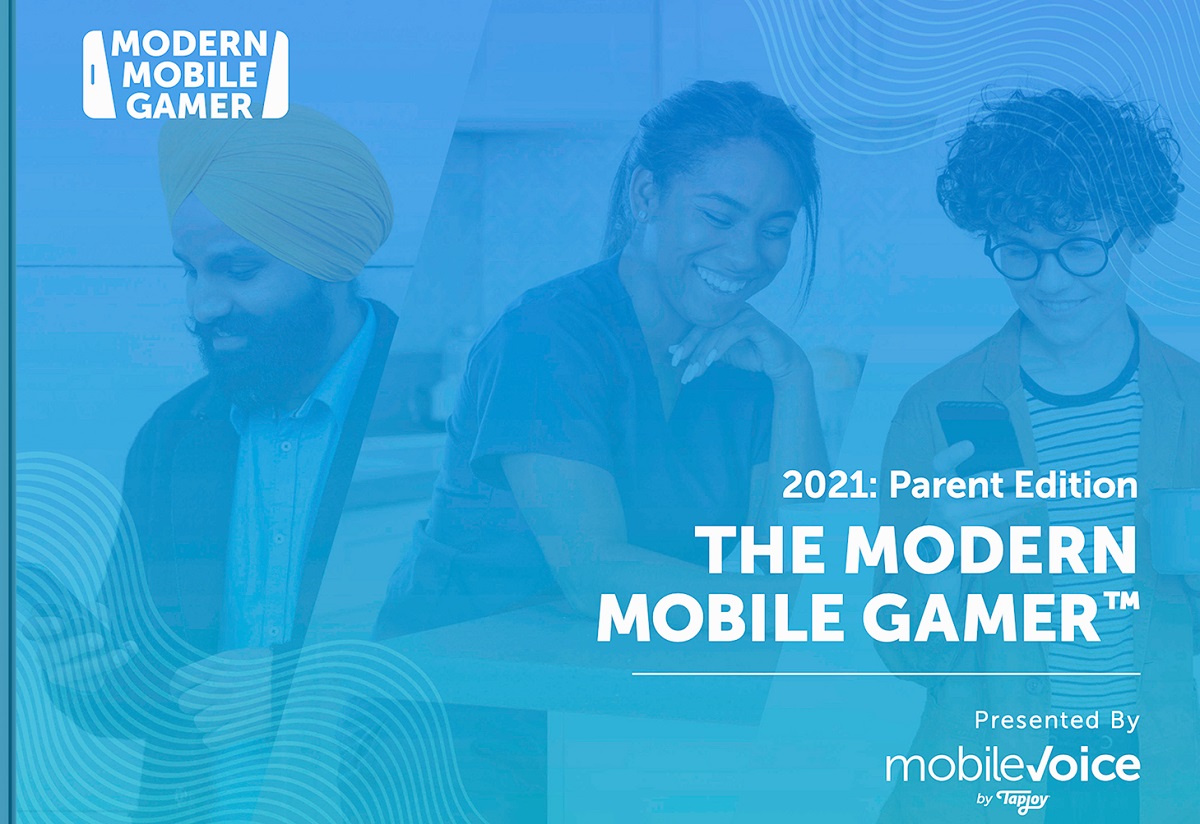 Today’s mobile gaming parents are heavily engaged with mobile games regardless of pandemic conditions, and they did more mobile shopping during the pandemic and plan to continue doing that, Tapjoy said.

One of the key findings is that among this group of mobile gaming parents in the U.S., it’s going to be hard to take away their smartphones and stop them from playing games. Tapjoy provides special ads know as offers to people so they can get things in mobile games. If you sign up for a Netflix subscription, you can get something free in a game. About 90% of those parents surveyed — those who come to Tapjoy’s offerwall — say they play games.

One of the big questions Tapjoy got from its advertisers was whether mobile gamers who surged in the pandemic are going to stick around. They wanted to know if these people who are playing mobile games now will spend during the holidays. The indication is yes.

“We know that people are at home playing mobile games, but they also said that they plan to continue to do so, as some new habits have been built over the last year that aren’t going to be abandoned as soon as people start to return to what is perceived as normal,” said Katy  Fitzgerald, senior marketing manager at Tapjoy, in an interview with GamesBeat.

She added, “We also found that 58% of people said they’re downloading more games and apps. We found that 74% said that they played mobile games more in 2020 than in any previous year. And then we asked in the next question about whether they were going to continue playing mobile games, and the answer was yes.” 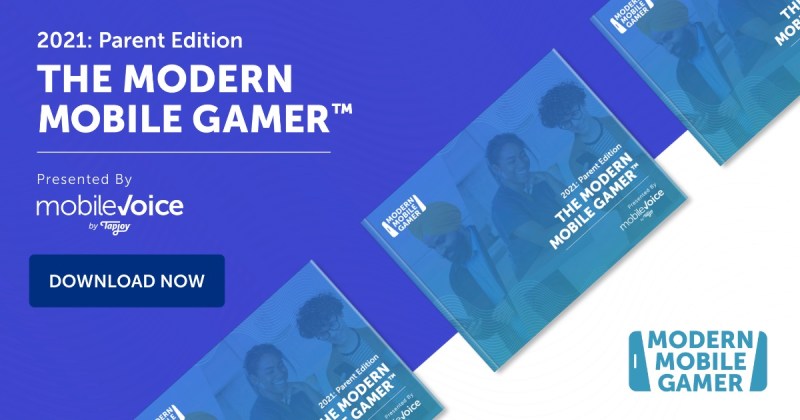 Above: Modern parents are mobile gamers and they’re tech savvy.

Tapjoy said 90% of its group of U.S. mobile gaming parents play games on mobile, and 70% play mobile games daily. Again, by way of explanation, this is not meant to mean that 90% of all U.S. parents play mobile games, since the pool for the survey consists of people who are already playing mobile games and have made their way to Tapjoy’s offer surveys because they want something in a game.

Still, it’s interesting data about how intense this group is when it comes to playing mobile games. The survey shows that modern parents are far more tuned in and tech-savvy than their own parents were. Because of their familiarity with the mobile ecosystem, they readily turn to their smartphones — particularly brand apps, social media, and rewarded ads — when it’s time to make a purchase.

This represents a major opportunity for advertisers who want to connect with the valuable parent demographic, Fitzgerald said.

Tapjoy did the survey over this year via its MobileVoice offering, which enables players to fulfill an offer for free stuff in a game by taking a survey. The report, Tapjoy’s Modern Mobile Gamer 2021: Parents Edition, gives a portrait of a group that advertisers may want to target better, said Fitzgerald.

The takeaway for game developers 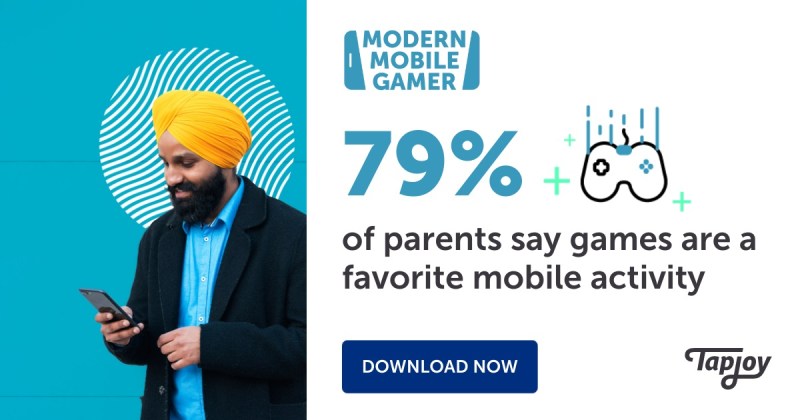 Above: About 79% of parents say games are a favorite thing to do on mobile.

Game developers who create content that caters to the modern parent demographic will find a ready audience — parents play consistently and explore new titles willingly. Tactics like cross-promotion are likely to succeed with them because they prefer free-to-play and give ads their attention.

Apps that capture this audience will also have unique appeal for brands, and thus be more profitable. Parents are a key audience for top brands because they make purchasing decisions on behalf of an entire household.

For these parents, mobile is a better platform, as 90% of them play on mobile and just 31% play on consoles or handhelds and just 23% play on the PC. Like all major consumer groups, parents upped time spent playing mobile games in 2020.

What makes a mobile game capture parents’ attention? Respondents noted that fun ads appeal to them, but social proof can also lead them to download games. Free-to-play is also an attractive model. 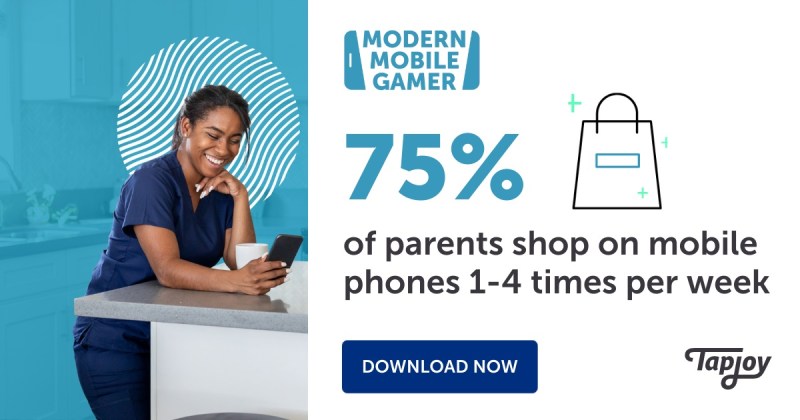 Above: Kaching. Parents play games on mobile and they shop on mobile.

Tapjoy surveyed 5,498 self-identified parent consumers in the U.S., and 39% of them were between the ages of 25 and 39. Tapjoy started with a sample of people who engage with offers, where players can get a reward in a game if they fulfill a special offer, like taking out a Netflix subscription. So Tapjoy’s pool of users consists of mobile gaming parents in the U.S.

About 79% of Tapjoy’s group said games are one of their favorite mobile activities. And while they like getting free stuff in games, these parents are also pretty good spenders. About three quarters of the gaming parents shop on mobile devices one to four times a week, and 73% say the convenience of mobile makes it an ideal shopping experience. Nearly half of parents shopped on mobile more during the pandemic and plan to continue.

“That’s also just a very clear pattern, where you can reach people through mobile games and find that they shop on mobile as well,” she said.

She said that parents are a crucial audience for advertisers since they control the wallets and purses. They spend both on behalf of themselves and their families. Tapjoy is sharing this report to educate brands on the habits and preferences of parents so they can engage with them more effectively. 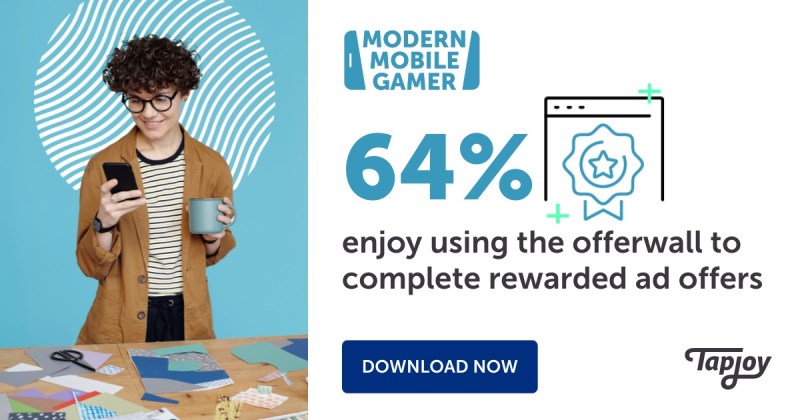 Above: Parents are cheap and they love special offers to get free stuff in games.

Additionally, Tapjoy’s latest report contains research and analysis about the modern family dynamic. Only 55% of those surveyed are married, and today’s parents eschew stereotypical gender roles in favor of a more balanced approach to employment, childcare, and housework.

The data was gathered from surveys run on the Tapjoy network in February and June 2021. Responses were filtered to include all respondents who identified as United States residents and parents.

“We’re trying to share data that our advertisers can use to make our network ads aligned with what consumers are asking for,” Fitzgerald said. “What we’ve found is the type of content and the type of ads that parents are responding to and want to respond to.”

Of the parents surveyed, 71% were female, which means that women are drawn to the kind of rewarded offers that Tapjoy has.

“Do moms play mobile games? What we found is that of the parents, a huge majority is female. So that is pretty significant as well,” Fitzgerald said.