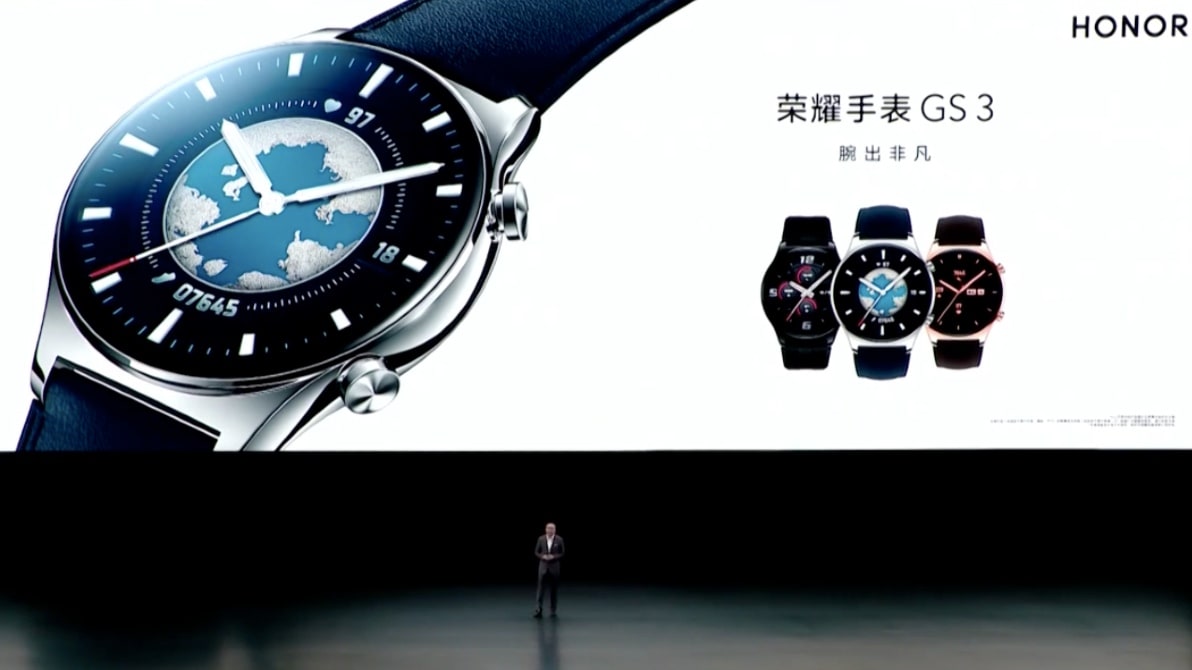 Honor Watch GS 3 was unveiled at the company’s mega event on Thursday, August 12. The new smartwatch is the first in the series to carry an eight-channel photoplethysmography (PPG) sensor, which is claimed to offer more accurate heart rate monitoring. Alongside the Honor Watch GS 3, the company at its launch event brought the Honor Tab V7 Pro as its latest tablet. The Honor Tab V7 Pro comes with a 120Hz display and offers up to 256GB of onboard storage. The tablet is also the first device to come with a MediaTek Kompanio 1300T SoC that was announced late last month.

Honor Watch GS 3 price is yet to be revealed. However, Honor announced at the event that the smartwatch will come in three distinct variants — ‘Voyager’ in a silver case with a blue-coloured leather wrist strap, ‘Streamer Classic’ in a golden case with a brown leather strap, and ‘Racing Edition’ in a gray case with a black rubber strap. Details about the Honor Watch GS 3 availability were not provided during the announcement.

The Honor Watch GS 3 comes as the successor to the Honor Watch GS Pro that was launched last year. The smartwatch has retained the circular design that was featured in the previous model. But, in a major change, the new watch carries an eight-channel PPG sensor that uses artificial intelligence (AI) backed algorithms to provide more accurate heart rate monitoring over traditional systems.

One of the key algorithms that the PPG sensor uses is a frequency tracking algorithm that helps track heart rate when a user is performing a strenuous exercise. Overall, the Honor Watch GS 3 is designed to use software and hardware collaboration for better heart rate tracking, the Chinese company said.

The Honor Watch GS 3 also carries two physical buttons and has a touchscreen. Detailed specifications of the smartwatch are yet to be revealed.

The Honor Tab V7 Pro runs on MagicUI 5.0 based on Android 11 and features an 11-inch 2K (2,560×1,600 pixels) IPS display with a 16:10 aspect ratio, 276ppi of pixel density, and a 120Hz refresh rate. The display also has DCI-P3 colour gamut and carries 6.9mm bezels that help bring an 86 percent of screen-to-body ratio. Honor has provided a 6nm octa-core MediaTek Kompanio 1300T SoC, along with a Mali-G77 MC9 GPU and up to 8GB of RAM. The tablet comes with a dual rear camera setup that houses a 13-megapixel primary sensor and a 2-megapixel macro shooter paired with an LED flash. There is also a selfie camera sensor at the front.

On the storage front, the Honor Tab V7 Pro has up to 256GB of storage capacity, along with support for expansion through a microSD card. Connectivity options include 5G (optional), Wi-Fi 6, Bluetooth v5.1, GPS/ A-GPS, and a USB Type-C port.

The Honor Tab V7 Pro comes with quad cameras that are backed by DTS:X Ultra. The tablet also has an optional Honor Magic Keyboard that includes a touchpad and enables a PC mode to deliver a laptop-like experience. The keyboard also has a magnetic design that looks similar to the Magic Keyboard offered by Apple for the iPad Pro. Additionally, the company has brought the Honor Magic Pencil 2 that has 4,096 pressure levels and a latency rate of eight milliseconds. The stylus also supports magnetic charging. The Honor Magic Keyboard includes dedicated housing for the Magic Pencil 2.

Can Nothing Ear 1 — the first product from OnePlus co-founder Carl Pei’s new outfit — be an AirPods killer? We discussed this and more on Orbital, the Gadgets 360 podcast. Orbital is available on Apple Podcasts, Google Podcasts, Spotify, Amazon Music and wherever you get your podcasts.
Affiliate links may be automatically generated – see our ethics statement for details.
This article was originally published by Ndtv.com. Read the original article here.