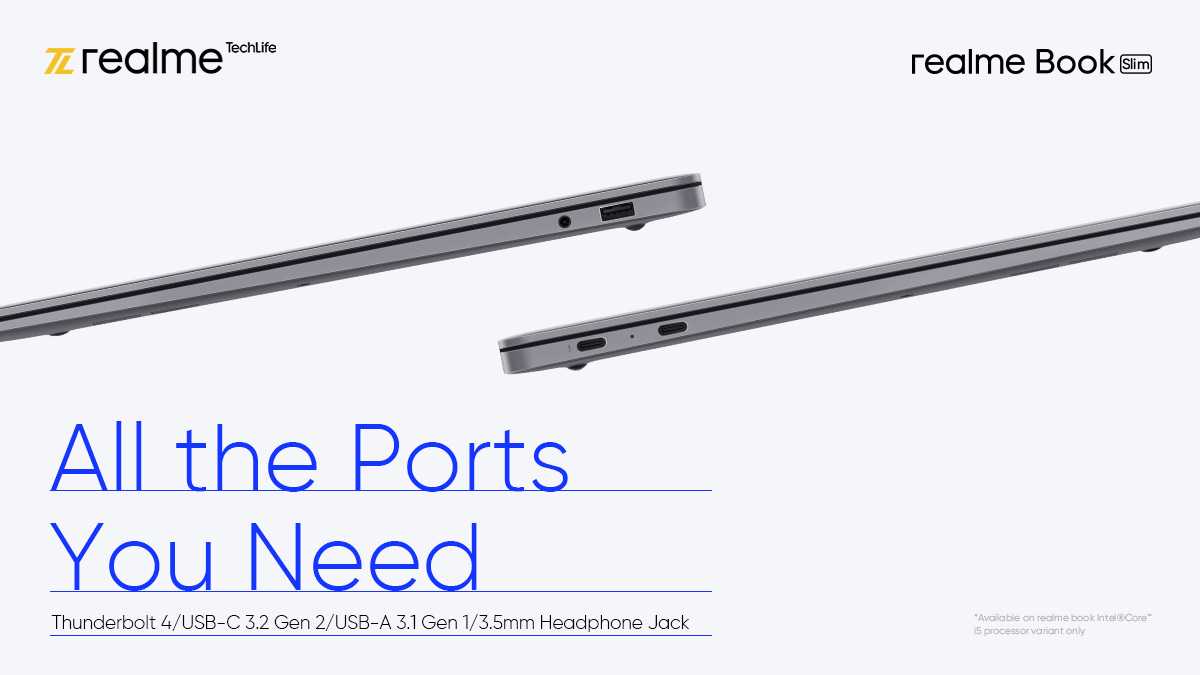 Realme Book Slim launch in India is around the corner and the company has shared details about its physical connectivity options. While the ports were already revealed through past images, the latest teaser suggests there could be a cheaper Intel Core i3-powered Realme Book Slim, besides the port details. Additionally, Realme Book —expected to be the name for the Chinese version of Realme Book Slim, has been confirmed to be powered by an 11th Gen Intel Core i5 CPU.

Realme India and Europe CEO Madhav Sheth tweeted an image for the upcoming Realme Book Slim, detailing the connectivity ports. It shows two USB Type-C ports on the left side and a single USB Type-A port, along with a 3.5mm headphone jack, on the right side. One of the USB Type-C ports on the left is a Thunderbolt 4 port while the other is a USB 3.2 Type-C Gen 2 port. Over to the right, there is a USB 3.1 Type-A Gen 1 port and the aforementioned 3.5mm headphone jack.

What’s more interesting about the image shared by Sheth is that at the bottom right corner, it mentions that this port selection is available on the Intel Core i5-powered model only. Most likely, this clarification is referring to the Thunderbolt 4 port, but it suggests there is an Intel Core i3-powered model of Realme Book Slim as well that does not have a Thunderbolt 4 port. This Core i3 model could come with either a Thunderbolt 3 USB Type-C port or a secondary USB 3.2 Type-C Gen 2 port.

Regardless of what type of port the rumoured Core i3 model will have, it will be cheaper than the Intel Core i5-powered model that has been previously tipped to launch at upwards of Rs. 55,000. Another report had claimed Realme Book Slim will start at Rs. 40,000 and this could be the Intel Core i3-powered model.

Furthermore, Realme Book is slated for a China launch on the same date as the Indian launch — August 18 — but that model will likely not carry the ‘Slim’ moniker. Now, the company has shared on Weibo that Realme Book will be powered by an 11th Gen Intel Core i5 processor, that is in line with the previously leaked specifications hinting at an Intel Core i5-1135G7 CPU. This will likely be the processor present in Realme Book Slim as well.