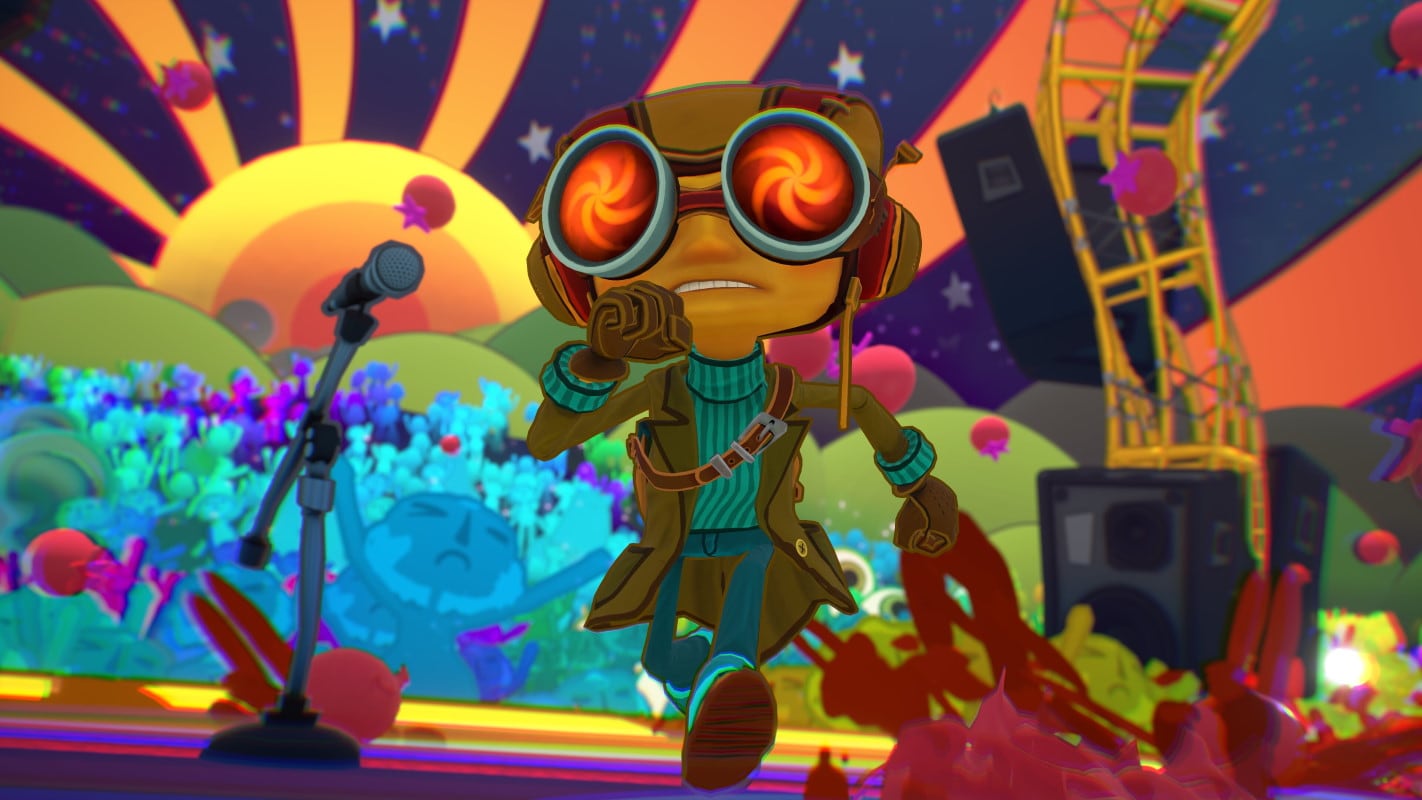 Psychonauts 2 is ready — and it’s here. Tell that to someone from the late ‘00s and they likely wouldn’t believe you. The original Psychonauts, released in 2005 on the original Xbox, PlayStation 2 and PC, had a tortured development process. Though it had Grim Fandango and Full Throttle director Tim Schafer at the helm, it was the first game for his new studio Double Fine. That resulted in all sorts of problems, resulting in Microsoft pulling an exclusivity deal midway through production. Double Fine found a new partner and Psychonauts released to critical acclaim, but it found few buyers, forcing its new publisher to exit the video game industry altogether. No wonder then that Schafer struggled to get Psychonauts 2 off the ground — and that it’s had its own share of setbacks.

When Psychonauts 2 was first announced in late 2015, Double Fine said it was turning to crowdfunding to cover partial development costs, just as it had for other games too. The campaign was successful and a couple of years later, the studio secured a publishing deal with Payday 2 parent Starbreeze Studios. But soon, issues emerged. First, Double Fine delayed Psychonauts 2 by at least a year, and then Starbreeze lurched towards insolvency due to its own troubles, forcing the makers to cut out boss battles, Schafer admitted. Imagine then the saviour turned out to be Microsoft — the company that had ditched them for being “expensive and late” on Psychonauts — who acquired the studio as it sought to build up Xbox’s first-party base. The miracles time can achieve.

Psychonauts 2 — which is not an Xbox exclusive, despite the Microsoft backing, though it is coming to Game Pass on day one, as a free download — is centred on the young gifted psychic Razputin (voiced by Richard Horvitz) who can jump into people’s minds. He returns from Psychonauts and Psychonauts in the Rhombus of Ruin, a short VR title released in 2017 that bridges the story of the two mainline games. Double Fine knows that its virtual reality-only existence limited its exposure (and that’s it been many years since we saw Raz), which is why Psychonauts 2 opens with a cutscene that reintroduces the protagonist and tells us what went down in the Rhombus of Ruin. Following those heroics, Raz and Co. arrive at the Psychonauts headquarters Motherlobe, where Raz sets out to solve a new mystery that might involve a mole, necromancy, and (obviously) some bacon.

Building on its predecessor’s themes, Psychonauts 2 continues to explore the human brain: our thought processes, resetting neural pathways, and being open to new ideas. In terms of gameplay, that manifests itself in Raz linking together different words — one of the game’s smartest ideas. It teaches important lessons to kids (Psychonauts’ primary audience) as players discover how the same words, when associated with different words, can change in meaning, and also your thinking, entirely. That can inevitably cause problems. Raz is told once that he shouldn’t manipulate someone’s mind in a bid to bend it to his will — there’s a bit of Inception to the narrative, yes — but Psychonauts 2 is contradictory in that it keeps asking the player to do just that, for its gameplay loop depends on it.

But don’t take any of that to mean it’s dour, sincere, and self-serious. I may have presented it in a straightforward fashion, but that’s only because I’m not Tim Schafer. Psychonauts 2 retains the first game’s zany sensibilities and continuously infuses light-hearted humour into its heavyweight topics. The game tells you that upfront with an advisory, noting that it features “artistic representations of serious mental conditions including addiction, PTSD, panic attacks, anxiety, and delusions.” It jokes about other things too — you will hear much of it as you walk past non-player characters (NPCs) — and Raz’s condition seems part of it. A cadet in Psychonauts, he’s an intern in Psychonauts 2. Raz makes no progress no matter what he achieves — is this because adults think kids aren’t capable of much?

As for gameplay mechanics, Raz has a number of psychic powers, most of which are returning from Psychonauts. There’s levitation, pyrokinesis, telekinesis, clairvoyance, PSI blast, and mental connection. PSI blasts are essentially energy projectiles that help you ward off enemies and shatter objects. With clairvoyance, Raz can see the world from someone else’s perspective, which is both useful and hilarious as everyone “sees” you differently. For some, you might be a cartoon, and for others you’re a dustbin. Double Fine says these will even change as the story progresses. In Psychonauts 2, you can equip four powers to the shoulder and trigger buttons, up from three in Psychonauts. As before, you can switch between them on the fly, and acing a level is knowing which PSI powers to use.

Because Psychonauts 2 is a game about kids and for kids, its gameplay features also reflect this choice. In settings, you can choose from one of or all three options. That includes no damage when Raz falls from heights, making Raz very strong in combat to put the emphasis on story, and the ultimate: invincibility. That would allow kids, who haven’t developed the requisite dexterity, to focus on fewer elements. Psychonauts 2 also helps you if you aren’t able to find your way, ensuring that everyone of all ages and vocabulary strength can play. But in other cases, like boss fights, it doesn’t believe in helping you too much. That said, I’ve yet to run into something akin to the Psychonauts‘s final level that was known for its extremely difficult nature and was fixed only years later.

The platformer bits in Psychonauts 2 are enjoyable and easy to pick up, though I wouldn’t say I have seen anything in my time spent with the game that was innovative. This year alone, we’ve seen the likes of It Takes Two, an excellent co-op adventure that borrowed and traded on a legion of platforming elements to craft its myriad worlds, each wholly different from the one before it. As with Psychonauts, the USP for Psychonauts 2 remains its eclectic nature, filled with all sorts of new and returning goofy characters. Add to that its visual aesthetic that mimics hand-drawn comic books, channelling an inner Tim Burton-esque vibe, and as if it’s been launched through a Technicolor post-processing system.

Performance was never an issue for me with Psychonauts 2. It looked and ran great on the Xbox One X, delivering a consistent 30fps at 4K resolution. It’s honestly not a title that needs next-gen graphics, though it does perform better if you’ve one. Exclusive to Xbox Series S/X on next-gen consoles, Double Fine claims Psychonauts 2 will deliver 60fps at 4K on the mightier Series X, and 60fps at 2880×1620 on Series S. You can also get 120fps though the resolution will suffer. The Series S/X version is also the only way to play Psychonauts 2 in HDR. On OG Xbox One and PS4, it’s locked at 30fps on full-HD. PS4 Pro owners will be upgraded to 1440p. You can run Psychonauts 2 on PlayStation 5 via backward compatibility — that also unlocks 60fps.

I only came across one bug in Psychonauts 2, with Raz getting stuck in some places that you can jump into but then can’t jump out of. It’s been a polished experience otherwise, yet again proving that games are better delayed than rushed. Psychonauts 2 has faced a long uphill battle, but its release is proof that some battles are worth the slog.

Will the PS5 be BETTER than PC? – TalkLinked #7
ChatGPT Usage Banned in French University Over Concerns About Fraud, Plagiarism
The Last of Us Episode 4 Trailer: A Road Trip Poses Big Trouble for Joel and Ellie
US Panel to Vote on TikTok Ban Over National Security Concerns in February
Realme Coca-Cola Phone Officially Revealed, Hinting at Imminent Launch