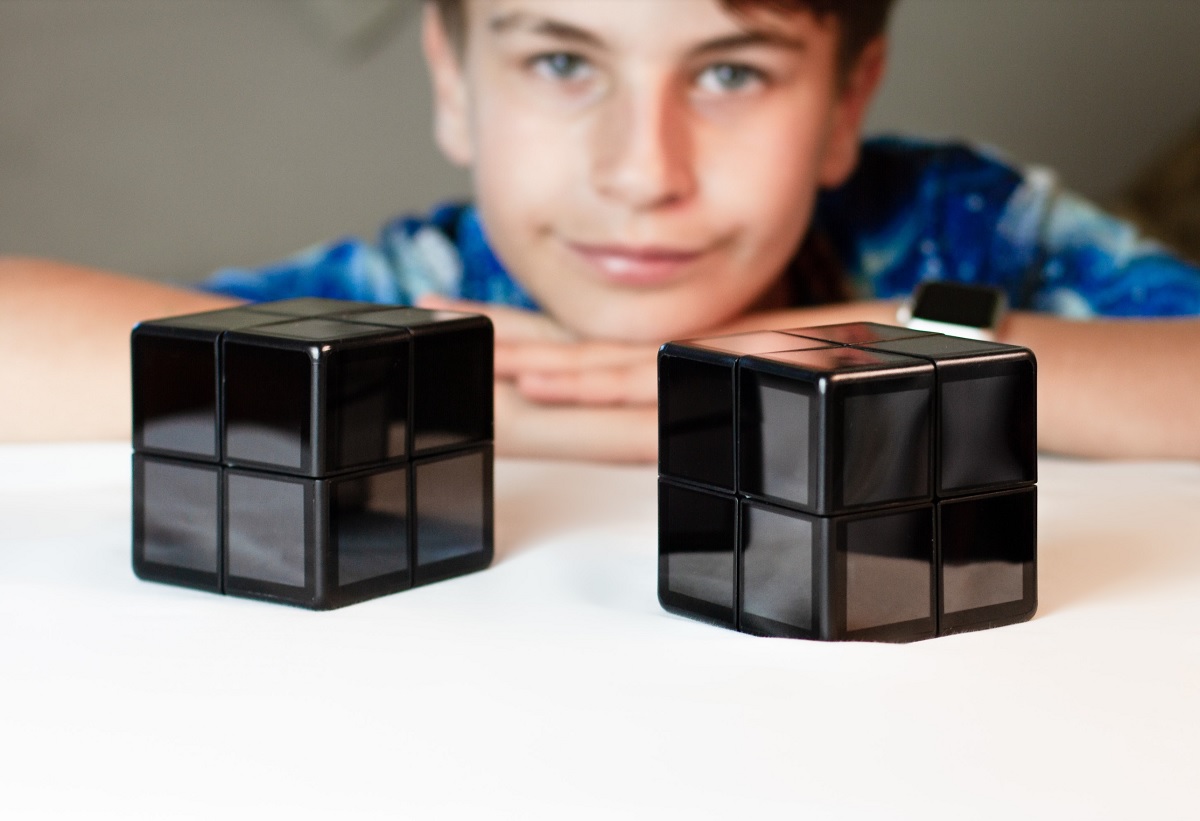 Cubios, the creator of the WowCube handheld gaming cube, has raised $1.5 million from the founder of Xsolla, Aleksandr Agapitov. The funding is part of a total of $4.5 million raised in the company’s latest round.

The WowCube is like a Rubik’s Cube with displays on it. It’s a simple device, and it is unique because it was conceived five years ago by a then-13-year-old boy and then built into a company by his father. The young teen asked his father if a Rubik’s Cube could be made with video game displays. And so his father, Ilya Osipov, started Cubios to make it happen.

The San Rafael, California-based company wanted to break away from the usual mold of traditional game consoles, handhelds, and smartphones. And it has created a gaming device that you can twist, shake, and turn in one’s hands. 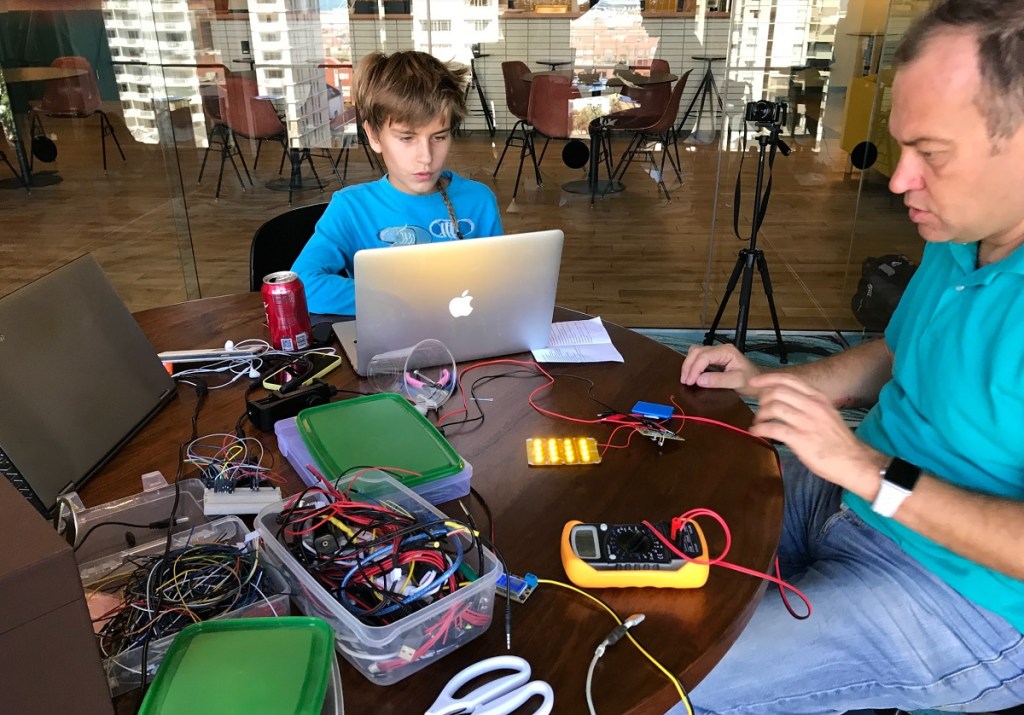 Above: Tinkering with WowCube prototypes.

Savva Osipov, now 17, and his family (including his father Ilya) are immigrants from Russia. Savva worked on gadgets like the WowCube, participated in Bay Area hackathons, and ran his own do-it-yourself (DIY) tech YouTube channel. That drew a lot of attention to the company, which his father helped take from idea stage to reality.

“It’s definitely a lot more complicated than the initial idea and even the first prototype,” said Savva Osipov in an interview with GamesBeat. “I thought it was possible and it’s proven. It was a surprisingly simple idea, like a Rubik’s Cube where you could play games on it. That was the idea. Who would have expected it would turn out so good.”

Ilya Osipov said in an interview with GamesBeat that he thought about it for a few days and then he called a patent lawyer to do research on such inventions. They couldn’t find anything else, and proceeded with the prototyping around the end of 2016. They started the company in April 2017. In 2018, Ilya Osipov showed prototypes at events and saw tremendous interest in the product. One investor put money into the company. 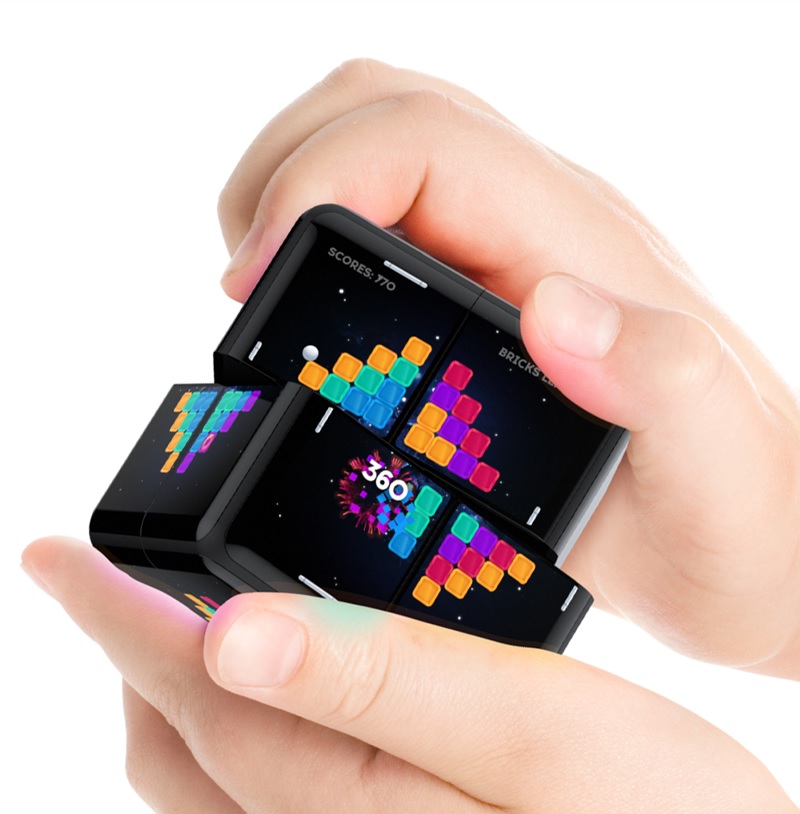 Above: You can twist a WowCube like a Rubik’s Cube.

“It is not technologically difficult to do, but our challenge was building it all from scratch, layer by layer,” he said. “It is a very unusual device with 24 screens and eight microprocessors.”

With that complexity, it’s a challenge to make the device cost effective for the youth market. One of the realities was that the team could create a cube with 2-by-2 squares on each side, rather than 3-by-3 like in a Rubik’s Cube.

“With 3-by-3, it would be way more expensive,” Ilya Osipov said. 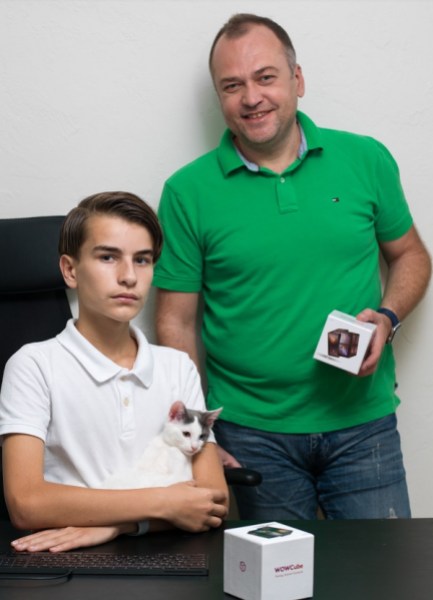 Above: Savva (left) and Ilya Osipov are the creators of the WowCube.

The WowCube entertainment system is in the shape of a cube made of eight connected modules. Twenty-four high-resolution screens cover the cube, converting the six side’s into a gameplay field. You control the cube on each side by twisting, tilting, tapping and shaking — much like with a Rubik’s Cube.

It delivers a unique user experience of interacting with the digital world as if it is a real object. Cubios is working on more than 30 different games: arcade games, puzzles, logic and strategy games, gamified educational apps, and many more for players of all ages.

In September, the company will launch a preorder campaign and open the software development kit (SDK) to third-party developers. WowCube has six approved patents and three pending applications. The patented magnetic connectors enable a continuous flow of information between the autonomous modules, ensuring a seamless gaming experience. A built-in gyroscope (it’s a beta version) supports a realistic response to gamers’ motions. 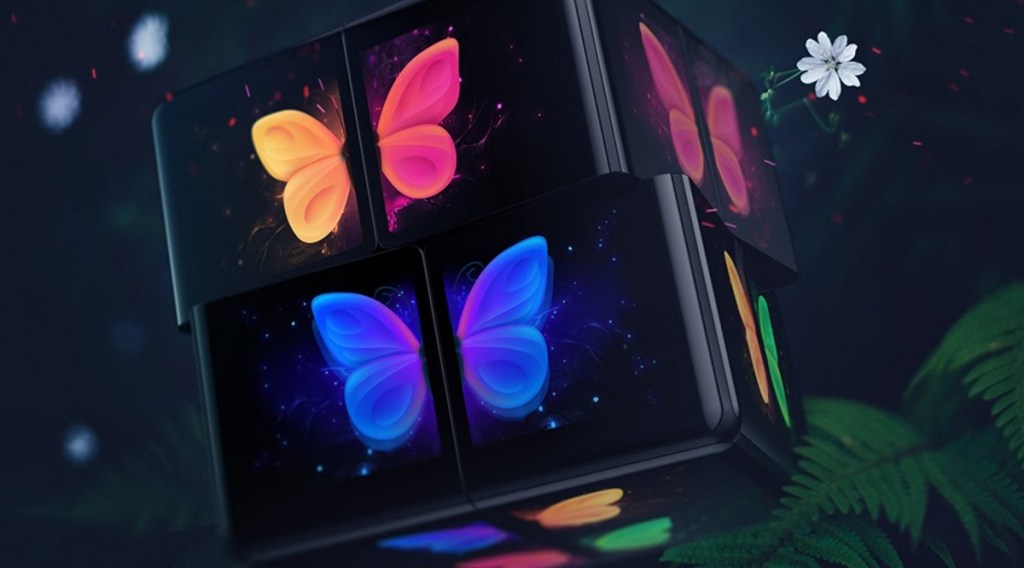 Above: Butterflies is one of the games on the WowCube.

The WowCube has won accolades such as the Last Gadget Standing, Edison Award, CES Innovation Award, and the Muse Design Award. The company said it has interest from distributors in 18 countries with preliminary orders for 155,000 devices, with the highest demand coming from Japan.

WowCube will come with several games, such as Pipes, Scrabble, Space, Puzzle, and Maze. You can load more games (up to 24) through the WowCube Store mobile app and via Bluetooth connectivity. Zeptolab, which had one of mobile gaming’s early big hits with Cut The Rope, is one of the companies developing a game for it.

Ilya Osipov said Xsolla provides smart money and gives access to an ecosystem of developers through its Game Investment Platform. The investment round closes September 30.

Xsolla has faced controversy in recent weeks after Agapitov’s Xsolla laid off 70 workers as the company was falling short of its 40% growth goals. That was tough for workers in part because of the cold messaging from Agapitov in a letter to the workers. Part of the controversy was that Xsolla used AI to determine if individuals were productive enough to remain employed. The company later said it was trying to be transparent and make sure it held people accountable in its processes. 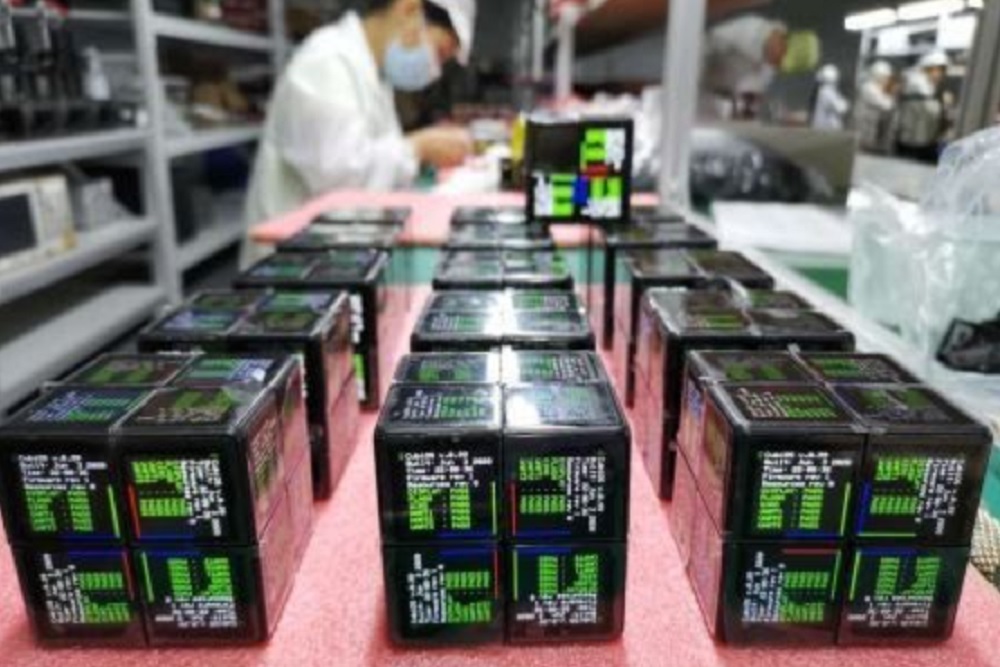 Above: WowCubes are going into production.

Ilya Osipov said his own company now has more than 30 employees across many different time zones and regions. His son has stayed involved in the project, often studying for school at the company’s office.

“I’m not a technical guy, but I believe my son will be,” Ilya Osipov said. “He really likes to communicate with people. It’s been great for him to participate in something that was built from scratch and can be sold in stores. It’s a great experience.”

Agapitov’s Hand of Midas investment company, a sister firm to Xsolla, led the investment. Besides Hand of Midas, Other participants include Dobro Capital, Starta Capital, InvestFest Network VC, Quonota, and individual angel investors that put an additional $3 million into the current round.