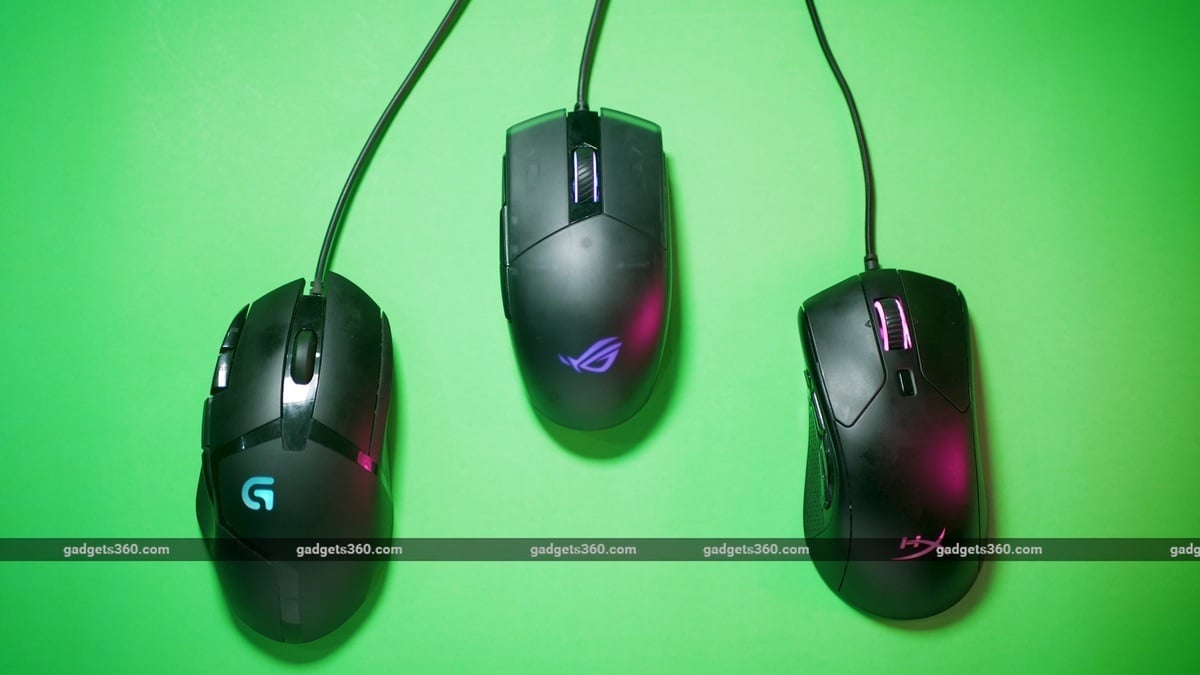 Ever since the pandemic forced us inside our homes, many of us have relied on our desktop PCs and laptops for a way to look away from what is going on outside. Many people have taken up PC gaming as a way to pass time. Multiplayer games such as Valorant, CS:GO and Apex Legends have grown in popularity, And to get good at competitive games such as these, you require proper gear. This includes a good set of headphones to hear where enemies are coming from, plus a good keyboard and mouse so that you can move around the game easily. Of course, these can also give you some gaming flair. Today, I will help you choose a good gaming mouse for less than Rs. 4,000, which will help you climb the ladder towards top fragging. For this, we will be comparing the Logitech G402, Asus ROG Strix Impact II and the HyperX Pulsefire Raid.

Starting with the Logitech G402, this mouse looks like something that fell from outer space. I was a bit skeptical about using this one because of how odd its shape is. It has eight programmable buttons which you can customize according to your liking using the software that it comes with. The HyperX Pulsefire Raid, another contender in the same price segment, has 11 programmable buttons. As for the ROG Strix Impact 2, it looks tiny next to these otherworldly mammoths, and because of its compact design, it only has five programmable buttons.

These extra buttons can help you quickly switch weapons or use tools while gaming, and also work for actions in common software such as copying/pasting things or going back and forward in your Web browser. You can even assign different macros to them which are shortcuts for tedious tasks that require multiple repetitive actions.

The Pulsefire Raid has five buttons on its left, where your thumb should rest. Four of them seem to be crammed in. I accidentally hit one or the other button unintentionally more than a few times. It would have been better if they had been spaced out a little in order to avoid accidental clicks. Thumb button placement on the G402 and Strix Impact II is similar. Both have two buttons on the left, but the G402 also has two additional buttons right next to the left-click button. When compared, the thumb buttons on the Logitech G402 seem to protrude more.

It’s worth pointing out that just the Strix Impact II is ambidextrous while the other two are only suitable for right-handed users. For me, the Strix Impact II was a bit too small and light. It weighs just 70g while the G402 weighs almost twice as much, and the Pulsefire Raid plays the middle field at 127g. Some people prefer light mice while others prefer heavier ones. In my experience, it was a bit tough to hit flick shots with the Strix Impact II since I kept flicking my wrist too far, which resulted in missed sniper shots. This will vary from person to person, so it’s better if you are sure of what you require in terms of weight since none of these have adjustable weights.

The G402 has a thumb rest which is quite helpful if you tend to use the thumb buttons a lot. The Pulsefire Raid, on the other hand, is slightly curved upwards which makes it seem as though it has a wider base. Some people might be comfortable with the high arch, while others might prefer the flat, mid-arch feel of the Strix Impact II, which has a simple and straightforward design.

The G402 and Pulsefire Raid have some rubber padding on either side for better grip. For some reason, the Strix Impact II does not. Instead, there’s just a bit of a texture on both sides, which is good, but I prefer rubber, especially for longer gaming sessions. Another issue with the plastic texture on the Strix Impact II is that it collects dust very easily.

The HyperX Pulsefire Raid and ROG Strix Impact II both have RGB lighting effects. The Strix Impact II showcases its RGB lighting on the ROG logo, the scroll wheel, and a pair of headlights, which look really good. The Pulsefire Raid gets the RGB treatment on its scroll wheel and the HyperX logo. The Logitech G402, on the other hand, is rather simple and only the Logitech logo lights up in blue.

The buttons of all three mice are made of high-quality plastic, and I did not find any flaws in construction. The tactile feedback and click sound of the G402 was a bit more satisfying than what I felt with the other two. None of these mice had overly loud buttons, which I personally like, because that means they won’t disturb other people.

As for scroll wheels, the one on the Pulsefire Raid felt a bit cheap and its tactile feedback wasn’t as satisfying as those of the other two. However, the Pulsefire Raid is the only mouse on this list to have side scroll buttons. You can assign various tasks to these, which can make everyday computer usage more efficient.

The Strix Impact II has a rather sensitive scroll wheel button-press action, so if you scroll a bit too fast, chances are you’ll click it by mistake and you will be scrolling down 10 pages at a time instead of just one. The scroll wheel on the G402 has a rubber finish and is smooth.

The glides on all three mice were very smooth and I did not face any issues when moving them across my mousepad. In fact, I even tried using these mice without a mousepad and they all registered movements correctly without picking up scratches on the underside. The Strix Impact II was the smoothest of the lot thanks to its light body and the number of gliding pads installed. The Logitech G402 and HyperX Pulsefire Raid also have smooth pads on their bottoms that make movement across your surface easy.

The Logitech G402 has a decent quality 2.1m long cable. The ROG Strix Impact II also has a 2m long cable. I had to coil both to make room on my desk. On the other hand, the Pulsefire Raid has a 1.8m braided cable which should make it more durable over time. I did face some issues with kinks and had to straighten the cable sometimes for fully unrestricted movement.

DPI is one of those things that makes or breaks a deal for serious gamers. Simply put, DPI stands for dots per inch and is basically a measure of the sensitivity of a mouse’s sensor. The higher the DPI setting, the more intensely the mouse reacts to your inputs, and vice versa. DPI usually ranges from 400 to 16,000 for gaming mice. The Pulsefire Raid goes up to 16,000 DPI while the Logitech G402 can go up to just 4,000 and the Strix Impact II can go up to 6,200.

All three of these mice have on-the-fly DPI adjustment buttons. You can use the side buttons on the G402 to increase or decrease the DPI, and as for the HyperX Pulsefire Raid, you can use the button just below the scroll wheel to adjust between DPI presets. As for the Strix Impact II, the DPI button, for some reason, is placed on the bottom of the mouse, right next to the optical sensor. It isn’t meant to let you change the DPI of your mouse mid-game, and that would be inconvenient to try doing.

The Logitech G402 and the HyperX Pulsefire Raid both have a sniper button while the ROG Strix Impact II misses out on that feature. A sniper button lets you temporarily switch to a certain DPI setting that you define using the software, when you need extra sensitivity for a short while, for example, to line up a precise shot.

As for each manufacturer’s software, you get Logitech G Hub with the G402, Armoury Crate with the Strix Impact II and HyperX Ngenuity with the Pulsefire Raid. You can set up each mouse’s customizable buttons and also tinker around with RGB lighting effects. These tools will let you create macros and assign particular profiles for each and every game. For instance, if you launch Valorant, the mouse will automatically switch to that profile and work at the DPI that you’ve chosen.

As for onboard memory, the G402 only has one profile, while you can set up three profiles on the Strix Impact II. You can create as many profiles as you want for the Pulsefire Raid, but it can only remember its default settings.

The Logitech G402 has a 2.1m cable while the HyperX Pulsefire Raid has a 1.8m cable

I used these gaming mice intensively for a month and did not face any major issues with any of them during my gaming sessions. I played Valorant, Apex Legends, and Counter-Strike: Global Offensive for 10-15 hours in total with each of these devices. I had no trouble pre-aiming at enemies, controlling recoil, tracking enemy movements, or using the programmable buttons to trigger abilities. I did not face any noticeable lag between the time a button was clicked and when the intended action registered on the screen. All three mice handled their basic functions well.

Personally, I felt that the Logitech G402 and the HyperX Pulsefire Raid are better suited to FPS games since they provide a better grip. This is very important in competitive games, especially when they go on for hours and hours. The ROG Strix Impact II was also good, but I feel that it would better suit less reflex-dependent games such as League of Legends, Dota 2, Mirror’s Edge, GTA V, and RPG games. Throughout my usage, I had the DPI set to 1600 on all three mice because that, for me, hits the sweet spot. I didn’t have to flick my wrist unnecessarily or under-react to a sniper shot.

If you would like something more compact and light, the ROG Strix Impact II will suit you the best. Both these mice have good RGB lighting as well, if you are into that. Finally, if you want a more ergonomic mouse, and high-quality buttons, the Logitech G402 might just do it for you.

With This Wallet You Can Do Everything
Fntastic Denies ‘Scam’ Claims, Says The Day Before Delay Was Pre-Planned After MMO Gets Delisted From Steam
Garmin Vivomove Trend Hybrid Smartwatch With Up to 5 Days of Battery Life Launched: Price, Features
Windows 10 is going away…
Hackers Using SwiftSlicer Wiper to Destroy Windows Files, Security Researchers Say