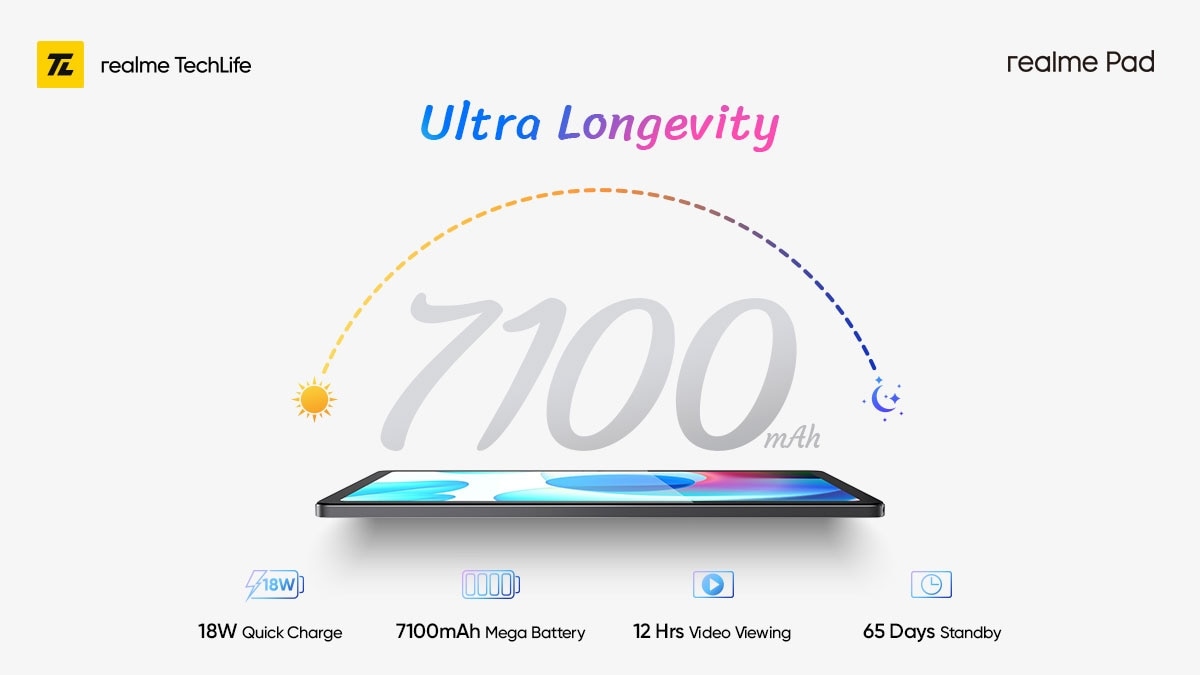 Realme Pad, the Chinese phone maker’s first tablet offering, will be launched in India on September 9. Some of the tablet’s key specifications have been teased by the company, offering a glimpse into its processor, battery, and fast charging capabilities. The company’s India and Europe CEO Madhav Sheth has shared a photo of Realme Pad on Twitter and revealed new details about Realme Pad, including its European availability. Several teasers and leaks have surfaced on the tablet in the past.

As per a couple of tweets posted by the Realme TechLife (@realmeTechLife) handle, Realme Pad will come with a MediaTek Helio G80 SoC. Aimed at gamers, the processor promises to bring stable frame rates and “brilliant” image quality. Realme Pad will also pack a large 7,100mAh battery that the company claims can provide 65 days of standby time. The tablet will also support 18W Quick Charge fast charging, as per the tweet.

Realme India and Europe CEO Madhav Sheth shared a photo of the upcoming tablet on Twitter. He wrote, “The familiarity with the UI has made it easier for me to get used to the latest #realmePad. It is very convenient for me to carry it everywhere in Europe, making it extremely easy to attend business meetings on the go.” Since he mentioned Europe on his tweet, it’s safe to speculate that Realme Pad will be available in the European market as well, apart from India.

The upcoming Realme Pad will be launched alongside Realme 8s 5G and Realme 8i on September 9. The virtual launch event will kick off at 12:30pm IST.

Ahead of the launch of Realme Pad in India, a dedicated page recently went live on Flipkart. It confirms the key specifications of the device including the 6.9mm thin body, a 10.4-inch fullscreen WUXGA+ display with 2,000×1,200 pixels resolution, and an 82.5 percent screen-to-body ratio. On the teaser page, the Realme Pad is seen to carry two cameras — one on the back and one at the front. Past leaks suggest that Realme Pad may have 8-megapixel sensors at the front as well as on the back. The Android-based Realme Pad is expected to have sensors including accelerometer, ambient light sensor, and proximity sensor.

Apple to Limit Wi-Fi 6E Connectivity to iPhone 15 Pro, iPhone 15 Pro Max Models: Report
Government to Hold Discussions With Stakeholders on PIB Fact Checks for Social Media in February: MoS IT
13 Coolest Gadgets That Are Worth Seeing
What is Intel playing at…?
US Senator Urges Apple, Google to Remove TikTok From App Stores Over National Security Risks