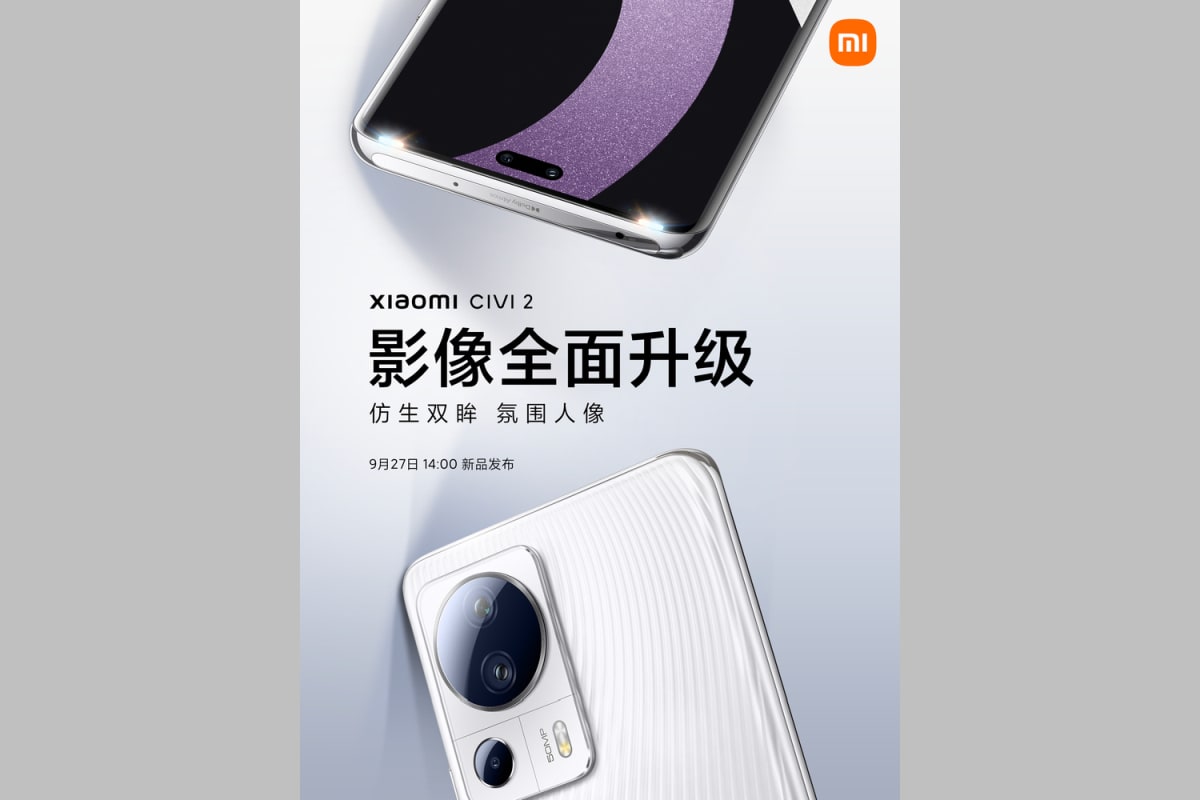 Xiaomi Civi 2 front design and front camera specifications have been revealed by the company ahead of the upcoming launch of the smartphone. The Xiaomi Civi 2 will come sporting a pill-shaped cutout for two front-facing cameras. A tipster has also hinted that the smartphone from Xiaomi may make its debut on the global market. The rear design of the handset was revealed by the company yesterday and the Civi 2 will house a 50-megapixel primary camera. The Chinese company is heading to launch the Xiaomi Civi 2 in China on September 27 at 2pm local time (11:30am IST).

The latest official renders of the Xiaomi Civi 2 via Weibo has revealed the front design along with the selfie camera specifications of the company. As mentioned earlier, the Civi 2 from Xiaomi will house a pill-shaped cutout which will be situated at the centre for two front-facing cameras.

The upcoming Xiaomi Civi 2 official renders have been revealed by the company and the renders show that the smartphone will come with a wavy pattern on the back side. The Xiaomi Civi 2 is shown to feature a 50-megapixel triple rear camera setup with an LED flash.

As mentioned earlier, the handset from Xiaomi will launch in China on September 27 at 2pm local time (11:30am IST).

According to a recent report, the Android 12-based MIUI 13 stable version is ready for the Xiaomi Civi 2, suggesting that it could run the latest user interface out-of-the-box. The phone is said to not launch in India.

To recall, tipster Kacper Skrzypek (Twitter: @kacskrz) has mentioned via Twitter that the Xiaomi Civi 2 will make its debut in global markets too. The smartphone will reportedly launch in other markets outside China with either the Xiaomi 12 Lite 5G NE or the Xiaomi 13 Lite branding.

As per another report, the Xiaomi Civi 2 will be powered by a Qualcomm Snapdragon 7 Gen 1 SoC. The Xiaomi Civi 2 could reportedly sport a 6.55-inch AMOLED display with full-HD resolution. The handset is said to feature “special” Vlog modes for the rear camera setup as well.

It is said to sport a micro-curved display with 120Hz refresh rate, Dolby Vision support, and narrow bezels. The phone was previous spotted on the China 3C database with the model number 2209129SC. The charging adapter of the Xiaomi Civi 2 was reportedly spotted with the model number MDY-12-EF and 67W charging support. The handset is said to feature “special” Vlog modes for the rear camera setup as well.

Buying an affordable 5G smartphone today usually means you will end up paying a “5G tax”. What does that mean for those looking to get access to 5G networks as soon as they launch? Find out on this week’s episode. Orbital is available on Spotify, Gaana, JioSaavn, Google Podcasts, Apple Podcasts, Amazon Music and wherever you get your podcasts.
This article was originally published by Gadgets360.com. Read the original article here.