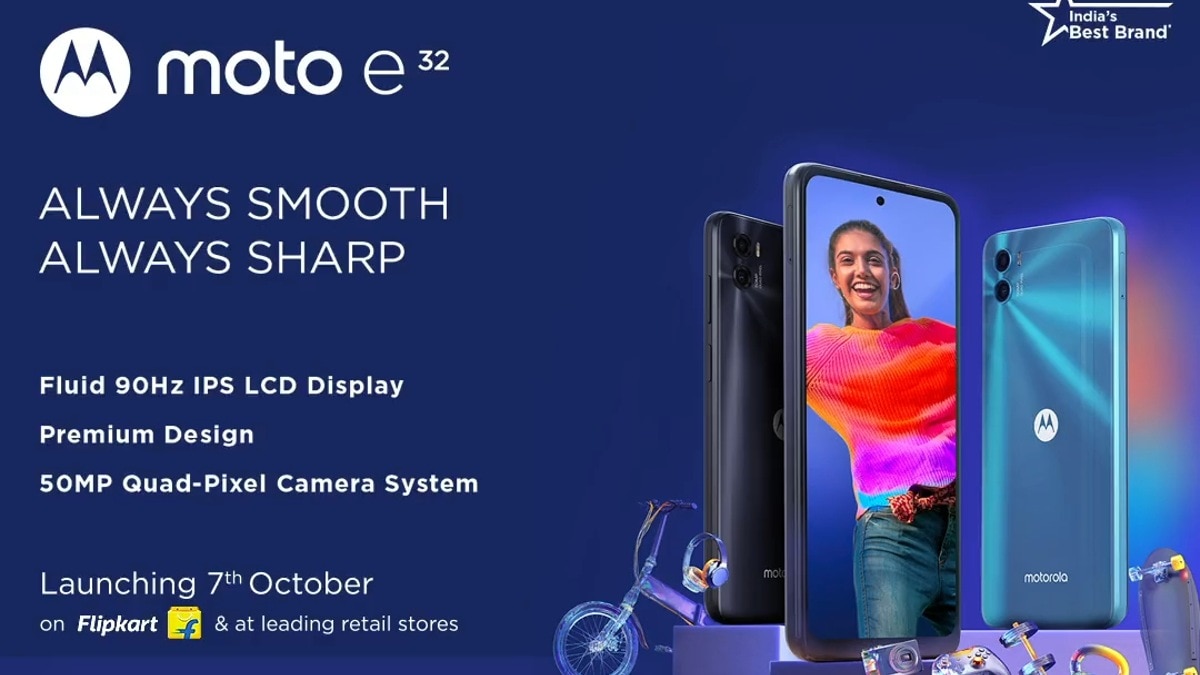 Moto E32 will launch in India on October 7, Motorola announced on Wednesday. The company released this smartphone in Europe earlier this year. However, it seems that the Indian variant will boast different specifications. Motorola has also revealed the complete specifications of this smartphone ahead of its launch. This Moto E32 variant is powered by a MediaTek Helio G37 SoC. It appears to bear more resemblance to the Moto E22s, both in design and specifications, that launched in Europe in August.

The Moto E32 will debut in India via Flipkart and other leading retail stores. Motorola has not revealed the pricing of this smartphone. This smartphone was launched in Europe earlier this year for EUR 149 (roughly Rs. 12,000).

Get ready to experience the #motoe32 that’s beautiful on the outside and stunning on the inside. It’s built for greatness with a fluid 90Hz IPS LCD Display, a premium design, a 50MP Camera System, & much more. Coming to you soon on 7th Oct. on @flipkart & at leading retail stores pic.twitter.com/2wvlKS50SM

Its listing on the Motorola India site has confirmed that the Moto E32 will have a single 4GB RAM + 64GB storage variant. It will come in Cosmic Black and Iceberg Blue colours.

As previously mentioned, this Moto E32 variant features similar specifications and design to the Moto E22s. The handset sports a 6.5-inch HD+ (720×1,600 pixels) IPS LCD screen with a 90Hz refresh rate and a 20:9 aspect ratio. Under the hood, it packs a MediaTek Helio G37 SoC. The smartphone runs on Android 12 with the My UX interface. Motorola has promised 2 years of OS upgrades and security patches.

For optics, the Moto E32 features a dual rear camera setup headlined by a 50-megapixel main camera paired with a 2-megapixel secondary sensor. There is also an 8-megapixel selfie camera on the front. The smartphone packs a 5,000mAH battery with support for 10W charging.

The Motorola smartphone measures 163.9×74.94×8.49mm and weighs about 185g, the company says. It features a USB Type-C port and a 3.5mm headphone jack. The Moto E32 is a dual-SIM 4G smartphone that also includes a dedicated microSD card slot (up to 1TB). It supports dual-band Wi-Fi and Bluetooth 5.0 as well. For security, the handset includes a side-mounted fingerprint sensor and face unlock technology.